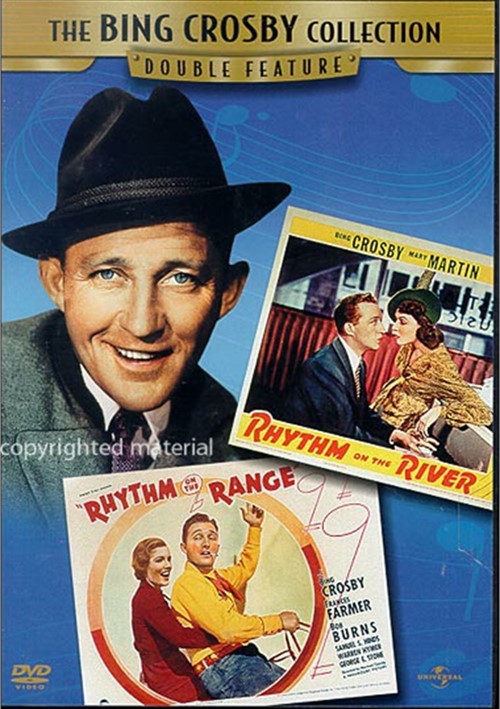 Rhythm on the Range

America's favorite crooner, Bing Crosby, lassoes up love and laughter as big as the great outdoors when he stars as Jeff Larrabee, a champion rodeo rider heading back West after performing in New York. On the train ride home he discovers a runaway heiress hiding out in his boxcar. Seems gorgeous Doris Halliday (Frances Farmer) is fed up with big city wolves and hanks for some romance with a real-life cowboy.

This sweet, swingin' tale is loaded with down-home humor, range-rousing songs (including "I'm An Old Cowhand" from newcomer Johnny Mercer) and many memorable firsts-including a peek at the yet unknown Roy Rogers (seen strumming his guitar in the band) and the screen debut of Martha Raye. So saddle up and sit back for a story that will keep your toes tapping on the happy trails ahead!

Rhythm on the River

Bing Crosby and Mary Martin make a delightful discovery in this tuneful stale of star-crossed melody makers who step out from the shadows in the hopes of making it big.

Basil Rathborne plays Oliver Courtney, a well-known composer of hit songs who is very much in demand by the folks who produce musical shows. But beneath the lass of a well-polished performance lies the truth about Oliver's talent-it's the work of ghostwriters! Bob Summers (Crosby) writes the tunes and Cherry Lane (Martin) writes the lyrics, only neither knows the other exists and both believe they are collaborating with Oliver. When the two meet at a musical retreat, they discover they have a lot more in common then they ever imagined and decide they'd like to go out on their own together. But the road to fame is rough and they wind up needing help from the one person who has the least interest in making their names known to the world of music-Oliver. Rhythm On the River is full of life, laughter, and love. Songs include "Only Forever," "Ain't It a Shame About Mame," "Moon Over Madison Square," and "That's For Me".

Review "Rhythm On The Range/ Rhythm On"

Reviews for "Rhythm On The Range/ Rhythm On"