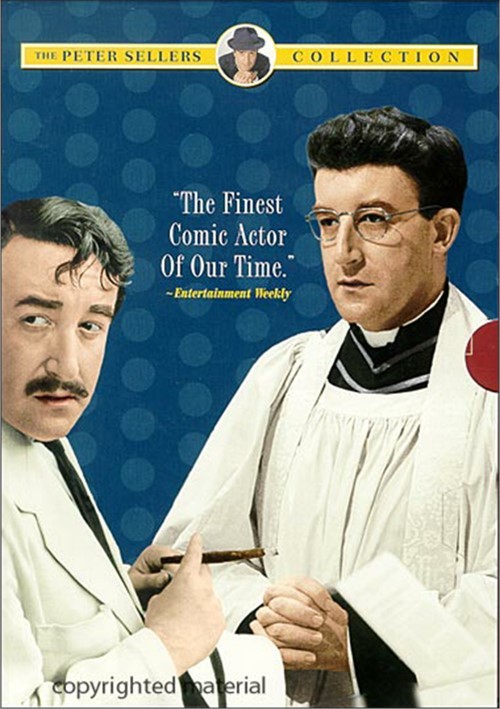 "The finest comic actor of our time." -Entertainment Weekly

When valuable mineral deposits are discovered on the forgotten British colony of Gaillardia, the Foreign Office sends bumbling envoy Cadogen de Vere Carlton-Browne (Terry-Thomas) to investigate. But while negotiating with their gleefully corrupt Prime Minister Amphibulos (a brilliant performance by Peter Sellers), Carlton-Browne is convinced to split the tiny island in half, sparking a revolution that leads to an international nuclear showdown with the Russians. Can the Empire's most disastrous diplomat now restore relations before the Cold War comes to a boil?

Peter Sellers gives one of his most surprising performances as Reverend John Smallwood, an idealistic prison chaplain who is accidentally assigned to a wealthy parish known for its popular sedative/laxative. But when Smallwood insists on ministering both to rich and poor alike, he infuriates the needy, the greedy, the religious hierarchy and even the government itself. Can the Church of England now silence their most compassionate cleric or will the vicar escape to serve the highest calling of all?

Peter Sellers gives a rare-and remarkable-dramatic performance as Benjamin Hoffman, a lonely middle-aged businessman who blackmails a beautiful young secretary (Sinead Cusack) into spending a week with him. But what begins as a seemingly sinister ordeal will slowly reveal itself to be an uncommon bond of tender yearnings, dark secrets and some very surprising realizations about the possibility of love.

Peter Sellers won his only British Academy Award for his career-making performance as Socialist shop steward Fred Kite in this brilliant class-struggle comedy. Ian Carmichael (Heaven's Above!) co-stars as naive Oxford graduate Stanley Windrush, who is hired as a common worker at his wealthy uncle's missile factory and quickly becomes a pawn in the battle between management and Mr. Kite's labor union. But can both sides stop a complete nitwit from single-handedly destroying the economy while becoming the symbol of integrity for an entire nation?

The Smallest Show On Earth

When their long-lost great uncle dies, newlyweds Matt and Jean Spencer (Bill Travers and Virginia McKenna of Born Free fame) inherit a small-town fleapit cinema along with the theater's eccentric and inept staff: Drunken projectionist Percy Quill (Peter Sellers), dotty cashier Mrs.Fazackalee (Margaret Rutherford of Blithe Spirit) and ancient usher/janitor Old Tom (Bernard Miles of Heaven's Above! and The Man Who Knew Too Much). But once the struggling couple is f-rced to renovate and operate the decrepit Bijou, they learn some uproarious lessons about life, love, big business and teh enduring magic of the movies.

Also known as Big Time Operators, this British comedy classic was directed by Basil Dearden (Who Done It?, The Mind Benders) from an enchanting script co-written by William Rose (The LadyKillers, Guess Who's Coming To Dinner?) and filled with delightful performances, especially 32 year old Peter Sellers as the elderly boozer Mr.Quill.

Peter Sellers stars as criminal mastermind Dodger Lane, a 'model inmate' living a life of luxury in Huntleigh Prison until he and his cellmates hatch a plan for the perfect robbery. Now all they have to do is escape from jail, steal a sultan's diamonds from a military convoy and break back into prison before their release the next morning. But even with the help of a phony vicar, Dodger's buxom fiancÃ©e and one felonious mum, will the perfect alibi be enough to pull off the perfect crime?

Reviews for "Peter Sellers Collection, The"