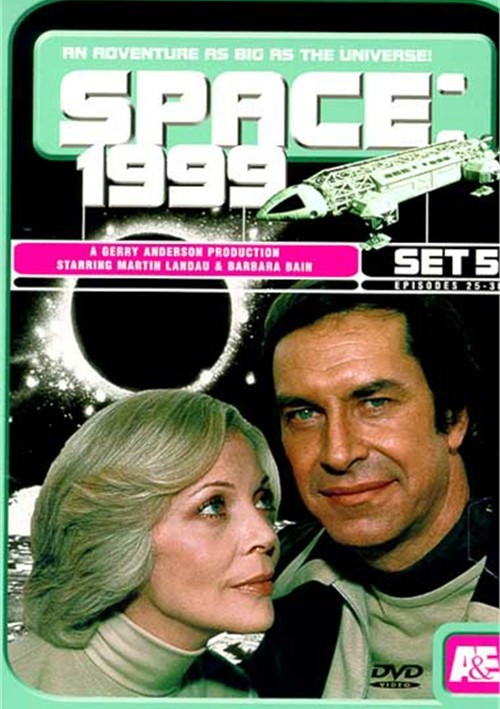 An Adventure As Big As The Universe!

A&E Home Video proudly presents the second season of world-renowned producer Gerry Anderson's seminal 1970's sci-fi adventure series... Space 1999. Year Two begins with the addition of Catherine Schell as the alien beauty Maya. With her abilities of molecular transformation - allowing her to transform into various life forms - and advanced scientific knowledge, her presence is an asset to the lost journeying Earthmen of Moonbase Alpha.

Witness the excitement of Space: 1999 as never before! Digitally remastered for a superior DVD presentation from the original 35mm elements! UNCUT, with 12 minutes of additional footage not seen in areas of the U.S. during original broadcast release! Combining elements of science-fiction, adventure and fantasy, Space: 1999 has claimed a worldwide following - finding a life beyond its titled date and securing its place in the 21st century and beyond.

An orb of light swallows a reconnaissance eagle delivering it to a planet in the throes of a volcanic death. In a desperate attempt to rescue the pilots, Koenig will become the tempest between an alien father and daughter - and a biological computer whose sustenance for power is the human soul.

A swarm of missiles sent from an alien world to wander space for all eternity are pulled into the earth moon's gravitational field. If they detonate, the moon would be obliterated - and all on Moonbase Alpha with it. But are they missiles, or something else? Should the Alphans intervene and question another civilization's judgment? The clock is ticking, and Commander Koenig must decide...

One Moment Of Humanity

The ruthless and cold Zamara (Billie Whitelaw) comes to Moonbase Alpha, denying it the power to sustain itself. She chooses two hostages - Helena and Tony - then spirits them to her home world of Zega. Tony and Helena's principles will be tested in exchange for the knowledge Zamara requires. In a dance of death the secret is revealed!

In the furthest reaches of space, much needed minerals and elements abundantly found on Earth have become as precious as diamonds. An away team lands to harvest one needed element and encounters a life form vastly different from our own with one exception - the need for water...

As the galaxies move, a path is opened allowing a transmission from Texas City, Earth to be received by the runaway moon. Centuries have passed on Earth and technology has been acquired to transport the Alphans home. After the device is built and activated, a seismic disturbance on Earth causes a shift in the transport. Now the search for Koenig, Helena, and Carter has begun with all of space - and even time - in speculation.

"Come one, come all... trade one, trade all!" Taybor's the name, trading's his game. Sailling from galaxy to galaxy with an array of wares untold, he carries a license in the fine art of bartering. His ship, the S.S. Emporium, holds many treasures, one of which is a jump drive that could aid the Alphans in getting home. The scales are set to begin the trade, with Taybor wanting Maya as the weighing coin!