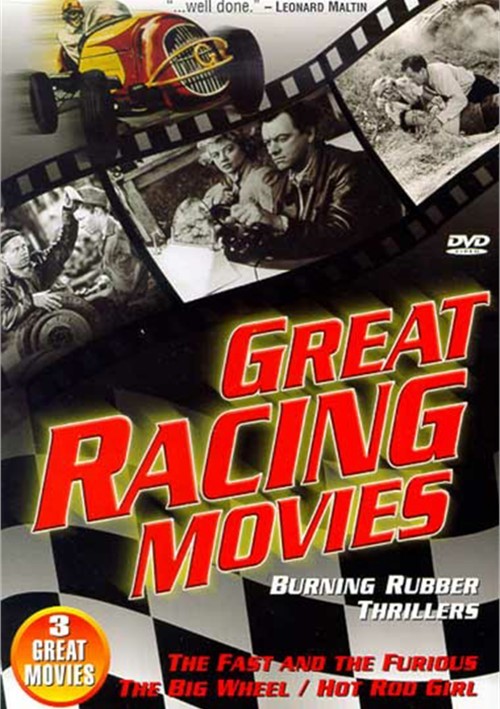 Gentlemen start your engines - and get ready for action that breaks all the rules, not to mention speed limits! Great Racing Movies takes you back to the golden age of the hot rod, when scores were settled with the rev of an engine - and nerves were tested with a speedometer. These three films are classics from an era of muscle cars, gum-snapping babes and in-your-face challenges. Are you up for it? Or are you chicken?

The Fast And The Furious

King of Camp Roger Corman scripted and produced this tale of a fugitive on the lam in a souped-up car - with an unwilling (but dishy) hostage riding shotgun. His escape involves a cross-country road race that ends in Mexico. Will he beat the odds to cross the finish line into freedom? Or will passion take him in a new direction? Starring John Ireland, Dorothy Malone, Marshall Bradford, Roger Corman. Story by Roger Corman. Produced by Roger Corman and featuring the music of Chet Baker.

Mickey Rooney is a young mechanic, desperate to prove himself and haunted by the memory of his father's death in a track accident. Against the pleadings of his father's best friend, he struggles to make it to Indianapolis - the same track where his old man was killed. Starring Mickey Rooney, Hattie McDaniel, Denver Pyle.

She's no lady - she's a chick who lives for chrome-plated thrills! Chuck Connors and a young Frank Gorshin star in this amped-up tale of teenaged terrorists who steal cars for money. But when one of them kills someone during a drag race, that's when the trouble really begins. Starring Chuck Connors, Frank Gorshin.