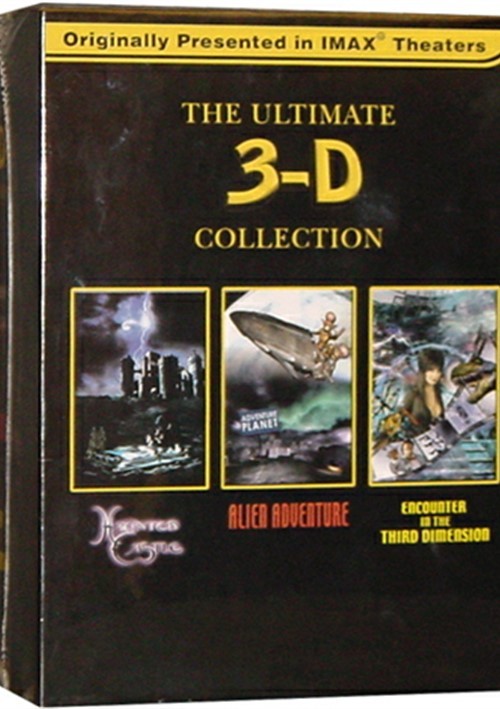 Transform your livingroom into a multi-dimensional adventure filled with eye-popping digital effects, live action thrills, and gravity defying races. This first of its kind Collector's Edition includes everything you need for the Ultimate 3-D Experience!

A young musician is summoned to his mother's castle in accordance with her final wishes. Upon his arrival, Johnny quickly discovers that things are not as they appear. The castle begins to come alive as materializing spirits lead him to Mephisto (voiced by Harry Shearer), the ghoulish henchmen to Mr. D (also Harry Shearer), who makes Johnny a tantalizing offer. The same offer that his mother accepted over twenty years earlier: surrender your soul in exchange for fame and fortune.

Experience a whirling visual thrill ride as Johnny explores the underworld of the castle to the explosive climax where Johnny confronts Mr. D and fights to free his mother's spirit.

Encounter In The Third Dimension.

Steadfastly moving through the galaxy, a group of aliens head toward planet Earth in hope of establishing a new home for their people. Little do they know, they're in for the ride of their lives when they land in the middle of "Adventure Planet," a new hi-tech amusement park not yet open to the public.

Join the Glagoliths in this first full-length digitally animated giant screen 3-D film and become immersed in a succession of eye-popping adventures NOT for the weak of stomach. Be prepared to venture into the bowels of an underground Arabian palace fully loaded with dungeons and dragons . . . Plunge into an underwater fantasy and come face to face with mechanical sea monsters and an all too real virtual shark . . . Zoom down a slick, winding ice track at astounding speeds.

Hold on to your seats, and don't say we didn't warn you!

Encounter In The Third Dimension

Join Stuart Pankin and Elvira - Mistress of the Dark on a groundbreaking venture into the realm of 3-D filmmaking, where captivating computer generated imagery mixed with live action thrills abound. Encounter early incarnations of the third dimension, from a recreation of one of the earliest 3-D movies ever made to classic clips from Cameron's theme park attraction, Terminator 2: 3-D. Experience the wildest 3-D adventure ever created for the giant screen!