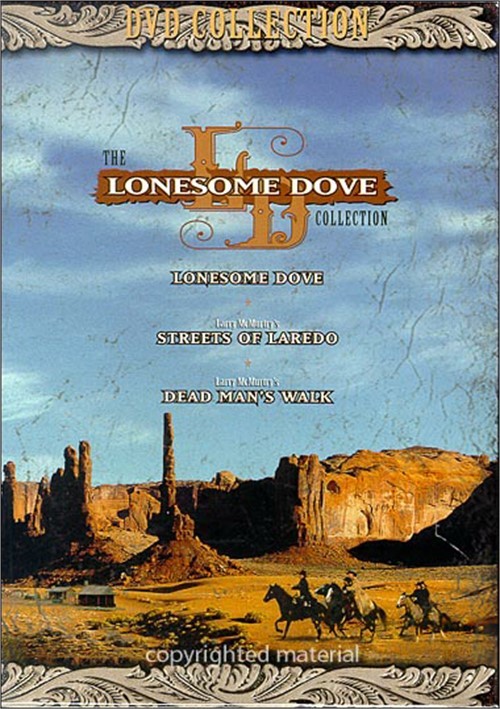 Hailed as a masterpiece by critics and audiences alike, Lonesome Dove brings to life all of the magnificent drama and romance of the West. Winner of seven Emmy Awards, and one of the highest rated miniseries in television history, this exciting re-creation of Larry McMurtry's Pulitzer Prize-winning novel captured the American pioneer spirit with its sweeping story and inspired performances.

Robert Duvall, Tommy Lee Jones and Angelica Huston star in the tale of two former Texas Rangers who leave the South Texas town of Lonesome Dove on an epic 2500-mile cattle drive to the lush ranch country of Montana.

Already a collectible classic, Lonesome Dove is an authentic piece of the American West and a saga that will be treasured for generations.

A vicious new breed of killer is stalking the west Texas plains. And only an old fashioned kind of lawman can stop him. That man is legendary Texas Ranger Woodrow Call (James Garner). Renowned as the greatest manhunter on the Southwest frontier, Call's mission will pit him against his deadliest adversary ever and lead him to the spectacular conclusion of the epic that began with Larry McMurtry's Pulitzer Prize-winning Lonesome Dove.

Also starring Sissy Spacek and Sam Shepard, the adventure begins will Call hard on the trail of murderous young train robber Joey Garza. Joined by his sidekick Pea Eye (Shepard), Call will wage the fight of his life as he battles to bring his quarry to justice - and bring himself and those riding with him out of the wilderness alive.

A sprawling, star-powered finale to one of the most beloved sagas ever to evoke the heroism, villainy and glory of the wild American West!

Set in the Texas Republic in the early 1840's, a time in which three cultures - Anglo, Hispanic and Comanche - were in furious conflict over the same harsh land, we are introduced to Augustus McCrae and Woodrow Call, the heroes of Lonesome Dove.

Gus (David Arquette) and Call (Jonny Lee Miller) are young Rangers, ripe for adventure, and they get it with the Texas-Santa Fe expedition, an ill-conceived effort on the part of some freebooters and adventurers to capture Santa Fe and annex New Mexico.

Led by the land pirate Caleb Cobb (F. Murray Abraham), and guided by the legendary Bigfoot Wallace (Keith Carradine) and his mountain-man friend Shadrach (Harry Dean Stanton), the group fights several engagements with the great Comanche warchief Buffalo Hump (Eric Schweig), is whittled down by the silent Apache, Gomez (Victor Aaron), and is captured without resistance by the Mexican army. Marched south by a resolute Mexican officer, Captain Salazar (Edward James Olmos), they survive bear attacks, ice storms, and the rigors of the barren desert known as the Jornada del Muerto.

In the end, they arrive at the leper colony of San Lazaro, where black and white beans are drawn to determine which of the invaders will live and which will die.

Accompanying the men of this trek is the colorful, amply fleshed whore known as the Great Western - Matilda Jane Roberts (Patricia Childress).

In Austin, Gus meets the love of his life, Clara Forsythe (Jennifer Garner), and in San Lazaro, they encounter the great English lady, Lucinda Carey (Haviland Morris), who, in the startling climax, helps them survive a last encounter with the wild men, led by the great Comanche, Buffalo Hump.

Reviews for "Lonesome Dove Collection, The"