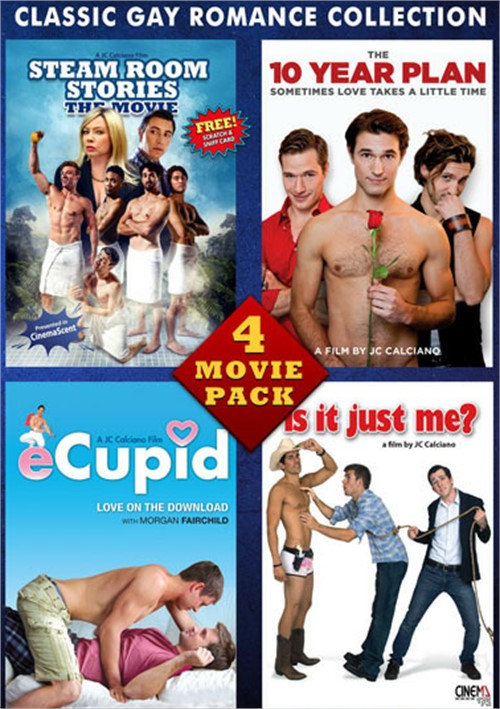 Get ready for the ultimate Gay Romance 4-Pack! Collect all four of these iconic gay romantic comedy films from beloved writer-director JC Calciano in one set. From the classic feel-good comedy Is it Just Me? to the riotously funny Steam Room Stories: The Movie, these four films are sure to satisfy your funny bone, as well as the hopeless romantic in you.

Originally released in 2010, Is it Just Me? is a gay rom-com take on Cyrano de Bergerac. Frustrated by his ongoing failure to meet "Mr. Right," Blaine (Nicholas Downs) stumbles upon what might be his perfect match in an online chat room. That would be Xander (David Loren), a sweet, hunky Texan who has recently moved to Los Angeles. Smitten, Blaine finds he's been mistakenly chatting to Xander under his go-go dancer roommate's profile, setting in motion an increasingly complicated comedy of errors with romance as the ultimate objective.

Released the following year, eCupid adds a fun sci-fi spin to the rom-com formula. Marshall (Houston Rhines) is a cocky young ad man working at a dead-end job for a boss who overlooks his talents. After seven years with his boyfriend, Gabe (Noah Schuffman), Marshall's love life has become too comfortable. Desperate for a new life, he goes looking online, where he comes upon a mysterious app called "eCupid" that guarantees to find true love. From the moment he downloads it, "eCupid" scans every inch of Marshall's online world and instantly turns his life upside down. Marshall suddenly gets everything he thinks he wanted. Newly single and ready for adventure, "eCupid" overwhelms Marshall with sexy guys at every turn, each promising to be the man of his fantasies. But too much of a good thing may not be a good thing at all.

The 10-Year Plan follows Myles and Brody (Jack Turner and Michael Adam Hamilton), best friends and total opposites. Myles is a hopeless romantic looking for "Mr. Right." Brody is a sexy player on the hunt for "Mr. Right Now." These two friends make a plan that they'll be together if both of them are still single in a decade. Nearly ten years later and still alone, both friends will do whatever it takes to avoid becoming a couple.

A hilarious feature-length comedy based on the wildly popular web series, Steam Room Stories: The Movie follows failing cosmetics magnate Sally Fay (Traci Lords), who will stop at nothing to possess the waters of our favorite steam room to help lift her sagging empire. What she doesn't count on is the Steam Room Guys banding together to thwart her evil plans.