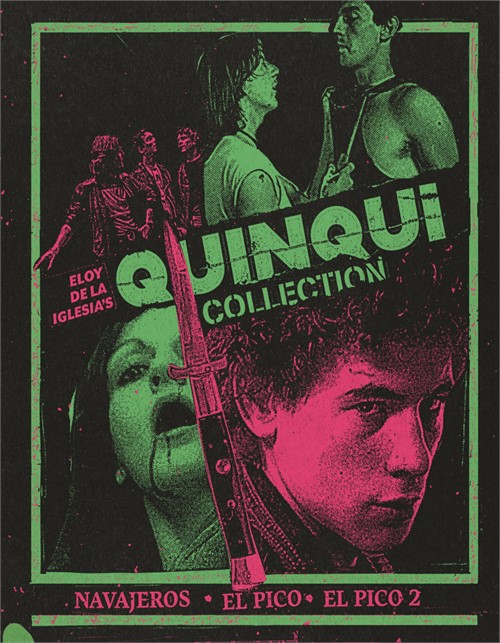 Short for "quincallero" (meaning "delinquent") and pronounced "kinky", "Quinqui" was a brutal sub-genre of juvenile gang dramas produced in Spain in the 1970s and '80s. But for Basque writer/director Eloy de la Iglesia (Cannibal Man, No One Heard the Scream), these three classics would become the most successful, controversial and tragically defining films of his entire career. Jose Luis Manzano - the charismatic street kid discovered by de la Iglesia - stars in this graphic neorealist trilogy that depicts the crime, violence and drug abuse that ravaged the post-Franco nation, and led to the filmmaker and actor's real-life addictions to heroin (and each other). Both would ultimately destroy them. The films Navajeros, El Pico and El Pico 2 are included in this unique set, all scanned in HD from the original negatives.

Special features also include: Original Trailers; Blood In The Streets: The Quinqui Film Phenomenon, an interview with Quinqui Historians Mery Cuesta and Tom Whittaker; and Queerness, Crime and the Basque Conflict in the Quinqui Films Of Eloy de la Iglesia, a panel discussion with scholars Alejandro Melero and Paul Julian Smith, moderated by Evan Purchell of Ask Any Buddy.