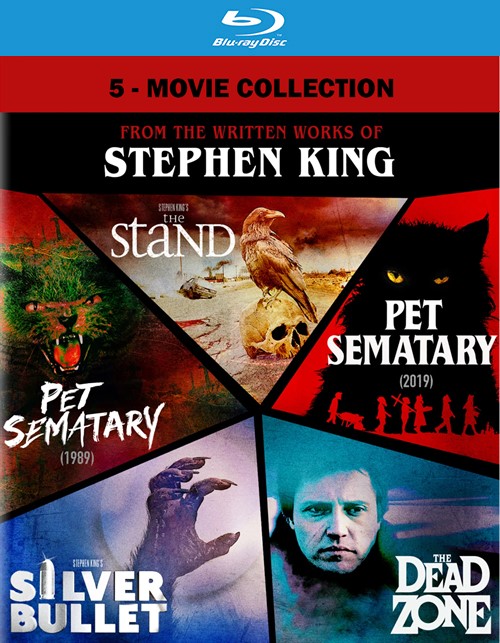 The Dead Zone: Christopher Walken wakes from a coma due to a car accident, only to find he has lost five years of his life, and yet gained psychic powers. Foreseeing the future appears to be a 'gift' at first, but ends up causing problems...

Silver Bullet: Something is killing off townsfolk in Tarker's Mills. Something mysterious. Something ingenious. Something remotely human. But the only person in town with courage to stop this lurking menace is a 13-year-old boy, confined to a wheelchair since birth. Adapted to the screen by suspense master Stephen King from his 'Cycle of the Werewolf' novelette, this exhilarating thriller features astounding special effects by three-time Oscar winner Carlo Rambaldi ('E.T.,' 'Alien,' 'King Kong').

Pet Sematary (1989): The terrifying tale by Stephen King is also a beloved adaptation of the best-selling author?s work. Pet Sematary follows the tragic story of the Creed family. After their cat is accidentally killed, a friendly neighbor advises its burial in a mysterious nearby cemetery. When the cat comes back, it?s only the beginning of an unthinkable evil leading to hell and back. Sometimes, so it seems, dead is better.

Pet Sematary (2019): Based on the terrifying novel by Stephen King? After the Creed family moves to rural Maine, they stumble upon an ancient burial ground with sinister powers. When tragedy strikes, a perilous chain of events unleashes an unfathomable evil.

The Stand: Originally aired as a television mini-series, this all-star filmization of Stephen King's gripping epic of good versus evil chronicles the episodic adventures of a disparate group of people who struggle to reestablish civilization after a man-made catastrophe wipes out most of the world's population. The world abruptly ends when a deadly virus accidentally escapes from a government sponsored biological warfare laboratory. Soon people are dropping like flies from the plague, but a few survive and find themselves strangely compelled to head into the West. Good-hearted people follow the voice of an ancient black woman and head for Boulder, Colorado. Bad people follow the enigmatic Walkin' Dude to Las Vegas. It is only a matter of time before the two sides are f-rced into a climactic battle over the final fate of humanity.