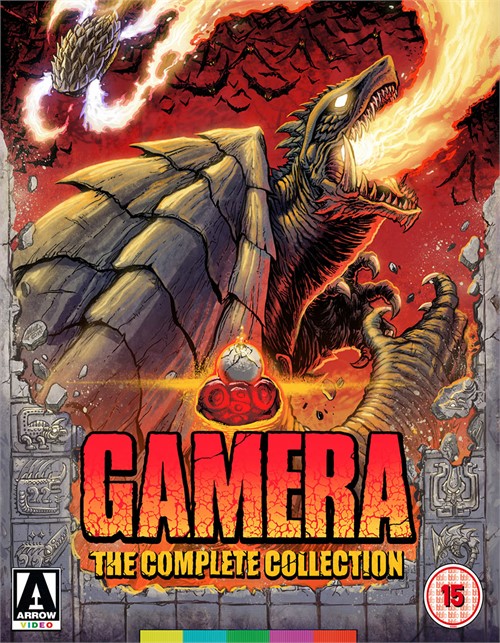 Note: This release is Region B

Full specs are tentative and subject to change

The original hero in a half-shell returns! For the first time ever worldwide, all twelve tales of the adventures of everyones favourite titanic terrapin are collected together in one deluxe Blu-ray boxset. This limited edition collectors set traces the decades-long evolution of Gamera, from the "friend of all children" in his more light-hearted earlier films, to the Guardian of the Universe in the groundbreaking 1990s reboot series, often hailed as three of the best kaiju films ever made.

* All twelve uncut original Japanese versions of the films in high definition, with lossless Japanese and English audio

* 4K restorations of the critically acclaimed Heisei trilogy (Gamera the Guardian of the Universe, Gamera 2: Attack of Legion, Gamera 3: Revenge of Iris)

* Hours of new and archive bonus features, expert commentaries (including August Ragone, David Kalat, and Steve Ryfle & Ed Godziszewski), interviews with cast and crew, and the worldwide Blu-ray premiere of Gammera The Invincible (the American theatrical version of the first film)

* Hardback 120-page comic book including a full-color reprint of the four-issue Gamera comic series originally released by Dark Horse Comics in 1996, and the first-ever English-language printing of the prequel comic "The Last Hope" by Matt Frank and Joshua Bugosh