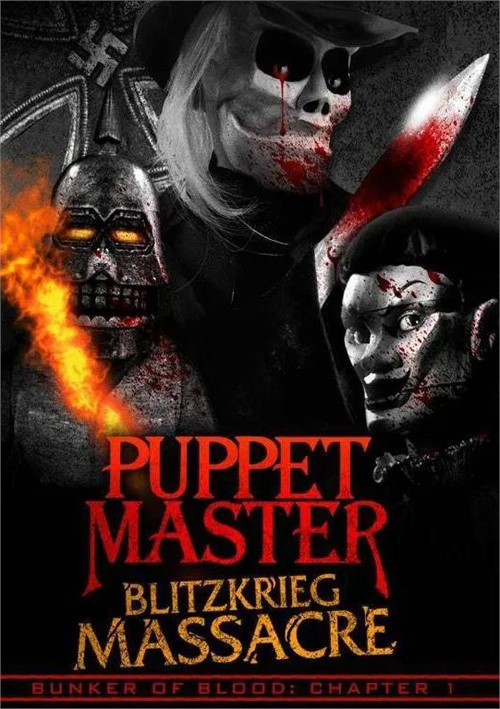 Drawing from nearly three decades of cinematic splatter and freakish filmmaking, PUPPET MASTER: BLITZKRIEG MASSACRE is the first chapter in FULL MOON'S BUNKER OF BLOOD, a gory "Greatest Hits" of the legendary studio's strangest and sickest sequences framed by an all new, all outrageous narrative that drives the viewer deep into the darkest, dankest madman's macabre lair. In an unknown dystopian future, a drifter with an unusually high-tolerance to pain is held captive in a horrific hospital by The Circle of Psycho Surgeons, a clandestine crew of M.D.'s (that's medical deviants) who are experimenting with human suffering. Suddenly, our shackled hero hears the call of "The Gore Collector", a sadistic curator of carnage who is well past his prime and now seeks an heir to take over his evil operation. Escaping from the lurid lab, the drifter enters the underground lair of The Gore Collector and there, the perverse programmer pops in a vile videotape and begins the process of trying to warp the man's minds with the goriest and gruesomest moments from some of Full Moon's most iconic film franchises in an all-out assault to the senses! Using lavishly illustrated comic book panels to bookend the twisted tale, PUPPET MASTER: BLITZKRIEG MASSACRE culls the sickest moments from the 11-film deep PUPPET MASTER series, mashing them together with macabre music and brand new moments of body-breaking mayhem. Can our hero survive the BLITZKRIEG MASSACRE? Can YOU?!?!