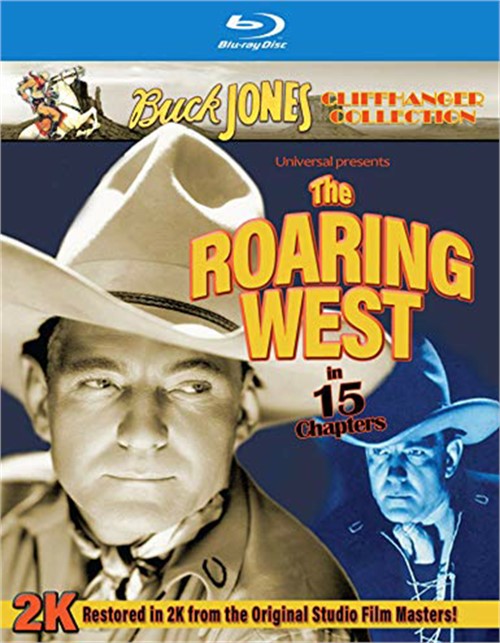 VCI is pleased to present this classic cliffhanger from Universal Pictures, which has never had an official video release on any format, now available for the first time on DVD, produced from the original studio 35mm film elements! "The Roaring West" was Universal's 27th sound-era serial and the second of the five serials Buck Jones made at Universa. The opening chapter of this serial --- "The Land Rush" --- finds cowpunchers Montana Larkin and Jinglebob Morgan riding into new territory to join an impending land rush. They carry a mail-order catalog hiding a map giving the location of valuable mineral deposits in the land-rush territory. They stop at the ranch of Jim Parker where Montana saves Parker's daughter Mary from a wild horse. The gabby Jinglebob plays poker with ranch foreman Gil Gillespie and reveals the secret of the map. Gil has his henchman, Hank, steal the map, copy it and return it without being seen. Montana, Jinglebob, Parker, Mary, Gillespie and Ann Hardy, a Parker niece, and some stock-footage land-rushers gather the next day for the land rush, where Montana learns that Gillespie has a copy of the map. Montana is riding hard to beat Gillespie to the mineral deposits but Mary falls from her horse and Montana picks her up on the run but the usually-reliable Silver falls over an unseen embankment, and Montana and Mary are underneath as the other horses and wagons plunge after them. That ends chapter one, but things get worse in chapter two as they find that Gillespie has beaten them to the site and has already staked nine claims. But Gillespie, the cad, is willing to share the claims with old man Parker if he will turn Mary over to Gillespie as his bride. 13 more chapters of such high-handed villainy occur before Montana gets total control of the situation.