Woman In Green, The 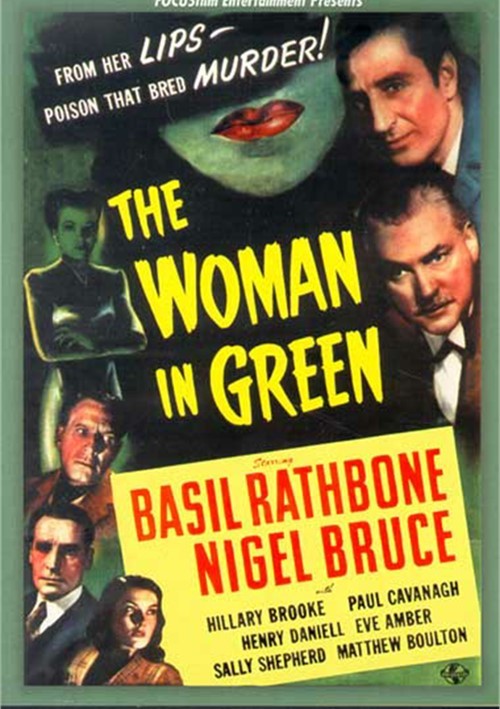 From Her Lips - Poison That Bred Murder!

The Woman In Green reintroduced Holmes evil alter ego, Professor Moriarty, now played with suave coolness by the London-born Henry Daniell. Years later, reflecting on the Holmes series, Rathbone wrote: "There were other Moriartys, but none so delectably dangerous as was that of Henry Daniell." Executive producer Howard S. Benedict concurred, but the character of Moriarty died a conclusive death in this film and did not return to haunt Holmes or movie audiences again - at least in this series. Reportedly Daniell was a serious fellow with interests in Eastern philosophy, a strict professional who kept to himself during filming. He certainly had no patience for delays on the set. The rest of the cast was far more relaxed. When a cocktail lounge scene between Rathbone and Hillary Brooke was taking too long to shoot, the pair decided to play-act at getting drunk, eventually slipping under the table to disappear! Gas-rationing had emptied American roads of foreign cars, but four of them, rented at rates of $35 to $50 each, did turn up in The Woman In Green. Two were classics from the late 1920s - the French Renault taxi and its British counterpart, the Martin. Such motoring curios would grace other Holmes films as well, providing a delightful, albeit brief showcase for the car aficionado.

Review "Woman In Green, The"

Reviews for "Woman In Green, The"