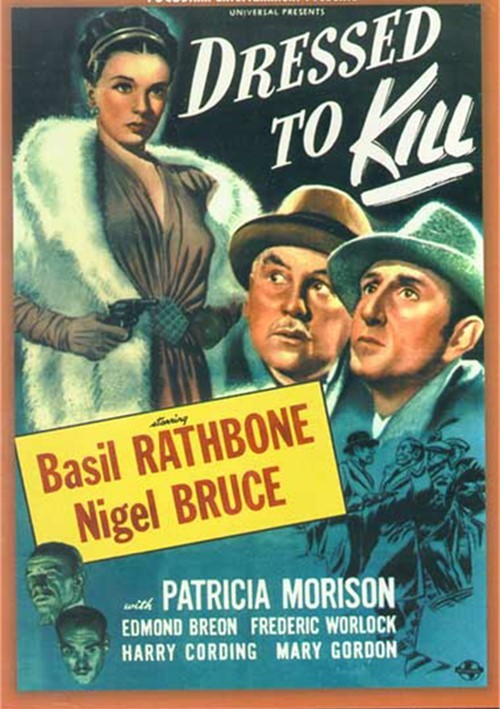 Dressed To Kill awakened memories of the Holmes of literature. Watson refers to the latest edition of The Strand Magazine and its publication of "Scandal in Bohemia." It didn't matter that original publication of this story took place in 1891, for producer/director Neill always made sure to merge the contemporary with the whimsical and decidedly more evocative past, a symbiosis that was part of the allure of the Universal films. This time, Holmes is up against Hilda Courtney, played by the sweetly beautiful Patricia Morison, a New York-born actress who specialized in exotic types in a mostly B-movie film career. It may seem curious that Holmes faced several "femme fatales" in his Universal days, but beautiful wicked women who led men to their doom were the rage in Hollywood, and pitting them against a man like Holmes seemed quite challenging, though the outcome of such a "battle of the sexes" was foreordained by Holmes' lack of sexual interest. Dressed To Kill was destined to be the last of the Holmes Universals. Four Holmes films were in the planning stages when Rathbone stunned the film community and the public by refusing to renew his contract. Likewise, he chose not to renew his contract for the Sherlock Holmes radio series, which expired around the same time. Simply put, after portraying the masterful detective more than two hundred times in seven years (primarily on radio), Rathbone was immensely tired of the role. Besides, he craved returning to his real love, the theater, and moved to New York soon after to pursue his goal.

Reviews for "Dressed To Kill"