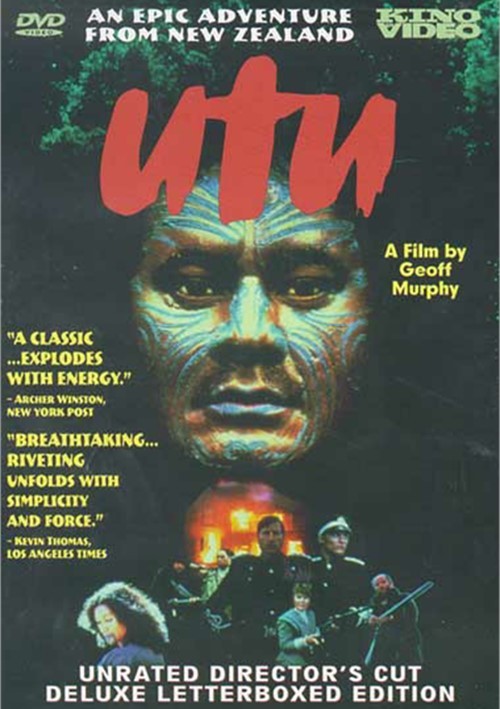 An Epic Adventure From New Zealand

Set in New Zealand against the bloody Maori Indian uprisings of 1870, Geoff Murphy's Utu is both a visceral adventure film and a devastating critique of British colonialism. First presented at the 1983 Cannes Film Festival, it won immediate critical acclaim and his become a landmark of the rich New Zealand cinema. Cut by fourteen minutes when first shown in the U.S., this Kino on Video edition restores Murphy's uncompromising vision of blood-ordained violence to its original, uncensored form.

While working as a guide for a British regiment, a Maori warrior, Te Wheke (Anzac Wallace), witnesses the cold-blooded slaughter of his village by the troops. Enacting the Maori ritualized revenge of "utu", Te Wheke has his face ceremonially scarred into an eerie battle-mask, assembles an impromptu band of Maori outlaws and launches a campaign of surprise attacks on New Zealand's white settlers.

Alternately satirical and terrifying in its depiction of the British hierarchy and the marauding Maori deranged by bloodlust, Utu is an old-fashioned American Western gone horrifyingly berserk. A riveting, intelligent treatment of the grim legacy of violence begetting more violence, Utu is an ultimately tragic tale (in the tradition of Once Were Warriors and The Chant Of Jimmie Blacksmith) of justice gone grotesquely awry.