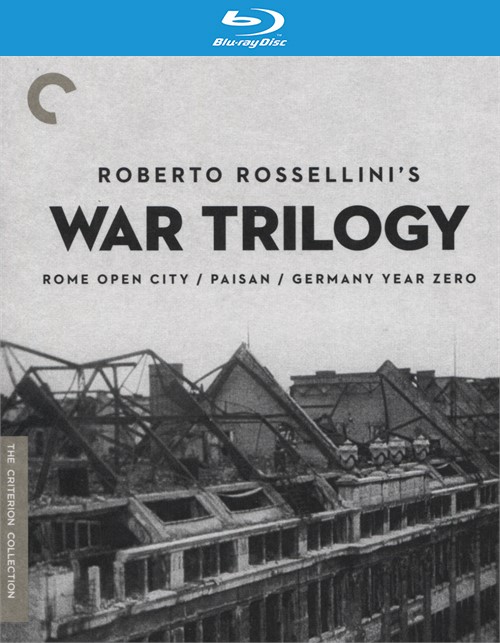 During the Nazi occupation of Rome in 1944, resistance leader Giorgio Manfredi is chased by Nazis and he seeks refuge and escape.

Six vignettes follow the Allied invasion from July 1943 to winter 1944, from Sicily north to Venice. Communication is fragile. A woman leads an Allied patrol through a mine field; she dies protecting a G.I., but the Yanks think she killed him. A street urchin steals shoes from a G.I. who tracks him to a shanty town. A G.I. meets a woman the day Rome is liberated; in six months they meet again: he's cynical, she's a prostitute. A US nurse braves the trip across the Arno into German fire in search of a partisan she loves. Three chaplains, including a Jew, call on a monastery north in the Apennines. Allied soldiers and partisans try to escape capture in the marshes of the Po.

Edmund, a young boy who lives in war-devastated Germany after the Second World War has to do all kinds of work and tricks to help his family in getting food and barely survive. One day he meets a man who used to be one of his teachers in school and hopes to get support from him, but the ideas of this man do not lead Edmund in a clearer or safer way of living...

New high-definition digital restorations, with uncompressed monaural soundtracks
Introductions by director Roberto Rossellini from 1963
Interviews from 2009 with scholar Adriano Apra, critic and Rossellini friend Father Virgillio Fantuzzi, and filmmakers Paolo and Vittorio Taviani
Audio Commentary on Rome Open City by acholar Peter Bondanella
Once Upon a Time... "Rome Open City", a 2006 documentary on the making of the historic film.
Rossellini and the City, a 2009 video essay by film scholar Mark Shiel on Rossellini 's use of the urban landscape in The War Trilogy
Excerpts from discussions Rossellini had in 1970 with faculty and students at Rice University about his craft
Into the future, a 2009 video essay about the war trilogy by scholar Tag Gallagher
Robert Rossellini a 2001 documentary by Carlo Lizzani, assistant director on Germany Year Zero, tracing Rossellini's career through archival footage and interviews with family members and collaborators, with tributes by filmmakers Francois Truffaut and Martin Scorsese
Letters fron the front: Carlo Lizzani on "Germany Year Zero" a discussion with Lizzani from the 1987 Tutto Rossellini conference.
Italian credits and prologue for Germany Year Zero
Roberto and Roswiha, a 2009 illustrated essay by scholar Thomas Meder on Rossellini's relationship with Roswitha Schmidt
Plus: A booklet featuring essays by James Quandt, Irene Bignardi, Colin MacCabe, and Johnathan Rosenbaum.