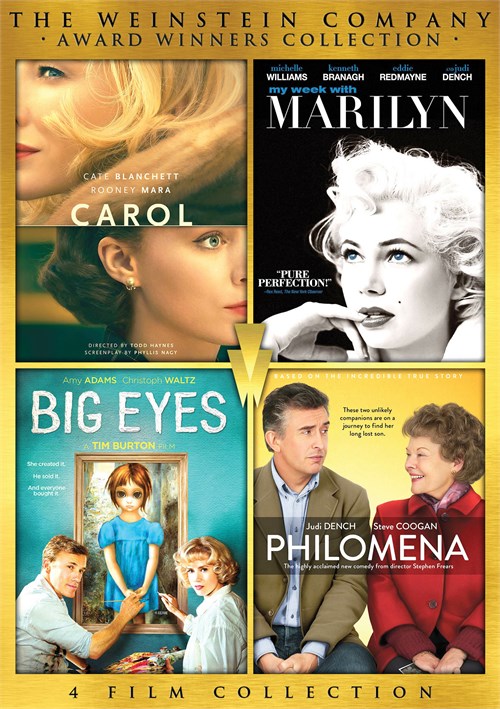 Carol follows two women from very different backgrounds who find themselves in an unexpected love affair in 1950s New York. A young woman in her 20s, Therese Belivet (Rooney Mara), is a clerk working in a Manhattan department store and dreaming of a more fulfilling life when she meets Carol (Cate Blanchett), an alluring woman trapped in a loveless, convenient marriage.

My Week with Marilyn

In the early summer of 1956, 23 year-old Colin Clark (Eddie Redmayne), determined to make his way in the film business, worked as a lowly assistant on the set of 'The Prince and the Showgirl', the film that famously united Sir Laurence Olivier (Kenneth Branagh) and Marilyn Monroe (Michelle Williams).

From director Tim Burton, Big Eyes tells the outrageous true story of one of the most epic frauds in history. In the late 1950s and early 1960s, painter Walter Keane (Christoph Waltz) had reached success beyond belief, revolutionizing the commercialization of popular art with his enigmatic paintings of waifs with big eyes. The bizarre and shocking truth would eventually be discovered though: Walter's works were actually not created by him at all, but by his wife Margaret (Amy Adams).

Judi Dench stars in the story of Philomena Lee, mother to a boy conceived out of wedlock and given away for adoption in the United States. Nearly 50 years later, Philomena meets Martin Sixsmith (Steve Coogan), a former BBC reporter looking for his next big story, and they embark on a journey to the United States to locate her long-lost son. As the pieces of the puzzle come together, the unlikely travel companions form a comic and heartwarming friendship.