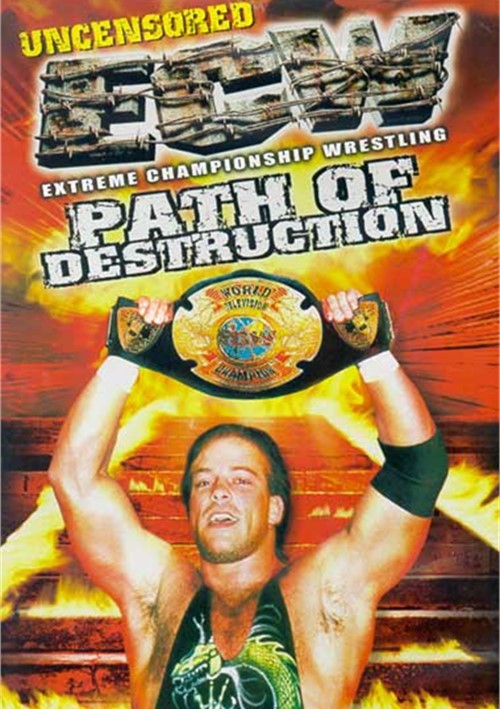 It's Time To Get Extreme!

Extreme Championship Wrestling returns with the second installment of what has emerged as the most talked about wrestling video available...Path Of Destruction. The voice of Joey Stiles give exclusive commentary and insight to memorable ECW matches. ECW, P.O.D. delivers the high-flying, hard-hitting, brutal action that pushes the limits of insanity to the point where it can only be labeled Hardcore!!!

Four men enter, but only one man will walk out as the ECW World Television Champion. This marathon match features an unbelievable ending and a moment the Queen of Extreme Francine will never forget!

The longest title reign in ECW history begins in Buffalo, NY, as Rob Van Dam and Bam Bam Bigelow battle for the ECW World Television Championship. The Beast from the East finds out why RVD if the "Whole F'N Show"!

The rage between Sabu and The Sandman escalated into one of the most brutal concepts in wrestling history: the Stairway to Hell. A match in which barbed wire is hung from the ceiling to become the ultimate weapon.

In the final battle of the tag team once known as the Bad Breed, brothers Axl and Ian Rotten unleash their fury in a brutal Taipei Death Match: taped fists covered with broken glass!

Representing the three wrestling capitals, United States, Japan, and Mexico, this is a battle of international proportions. This classic 3-way dance proves that Extreme warfare can take place in the air, as well as in the ring.

Emotions ran high at this classic farewell confrontation; a two out of three fall match that raised scientific wrestling to a whole new level. This is pure grappling at its finest, featuring two legends of ECW.

The ECW debut of two future superstars, this is the match that introduced the world to Extreme Lucha Libre. Rey Misterio Jr. and Psicosis combine their high flying Mexican style with hardcore action that you have to see to believe.