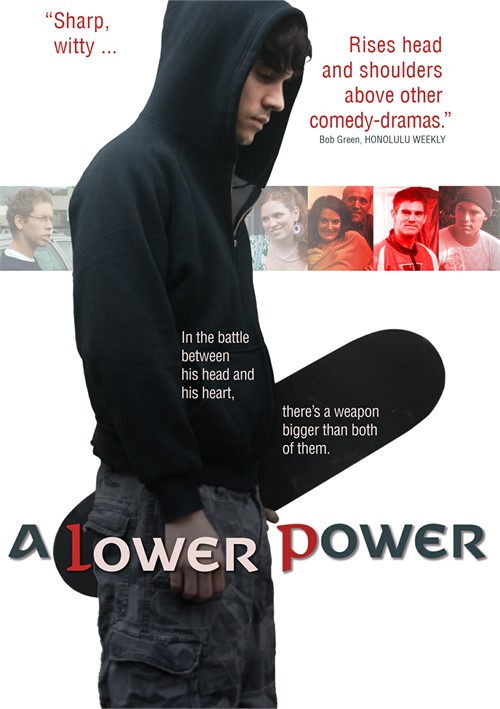 A young gay man is torn between his rejection of his hedonistic parents and his own emerging sexual desires.

Not everyone gets to watch a video of his conception... or wants to. Thibodeaux (Mathew Lotto) sure doesn't, but such openness is the exasperating norm for his parents, Hank (Donald Joseph) and Stormy (Gigi Guizado), whose nest he can't wait to leave. What this young man thinks he wants collides with the hard reality of desire in the idiosyncratic, unrepentantly sexual comedy-drama A Lower Power a gay coming-of-age story where the coming-of-age isn't about being gay.

When neither the geeky sanity of his friend Steve (Rafe Morgan Kossak), nor the advice of torturously heterosexual stud buddy Mas (Adrian Anchondo) provide an easy answer, Thibodeaux sets off on his own to college - where he hangs with bubbly Emmy (Terri J. Freedman) and seeks a sexless social life. But Thibodeaux's chastity strategies meet their match in Todd (J. William McMichael), a cocksure biker and Old English scholar who teaches Thibodeaux the power of passion. Even as Todd unleashes Thibodeaux's appetites and old friends come back into his life in surprising ways, Thibodeaux's repressive reflexes connect sex to misfortune and humiliation - until his contorted logic drives away his friends and the mythic man of his dreams.

Propelled by a muscular original score by H.P. Mendoza (the writer/director behind Fruit Fly and Colma: The Musical), A Lower Power touches on questions of faith and the nature of luck as it tracks Thibodeaux's tunnel vision to the (literally) climactic revelation that his urges aren't nearly as dangerous as they would be if they were denied.

Reviews for "Lower Power, A"