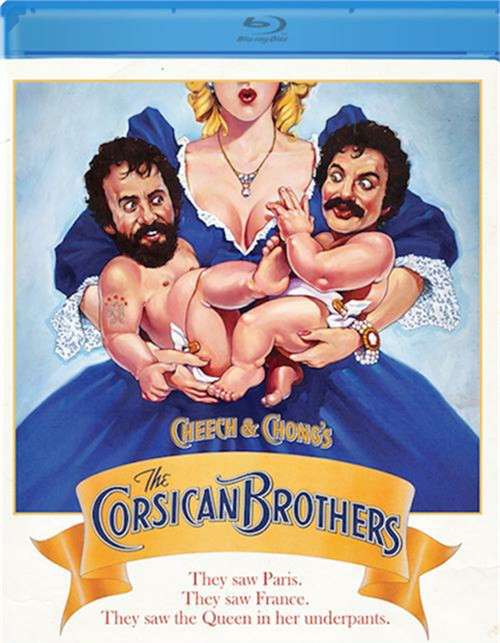 Trading bongs for bon mots, Cheech and Chong proudly place their names alongside such luminaries as the Brothers Karamazov and the Marx Brothers, portraying the brothers Corsican in Cheech & Chong's The Corsican Brothers, a comic adventure inspired by the Alexandre Dumas novella. As the story unfolds, our two heroes, down-on-their-luck rock musicians (Cheech Marin and Tommy Chong, Up In Smoke) wandering the streets of France after a disastrous performance (the locals have actually paid them to stop performing), happen upon a gypsy storyteller. The gypsy regales them with stories of the noble Corsican Brothers (also played by Cheech and Chong) who plot to take down the evil nobleman Fuckaire, portrayed with scenery-chewing glee by Roy Dotrice (Amadeus). Cheech and Chong's The Corsican Brothers, as written for the screen by Tommy Chong, Cheech Marin and Rikki Marin, is a Dumas tale of adventure like no other and features a cast that includes Jean-Claude Dreyfus (Delicatessen), Rae Dawn Chong (The Color Purple) and Edie McClurg (Ferris Bueller's Day Off).

Reviews for "Cheech & Chong's: The Corsican"