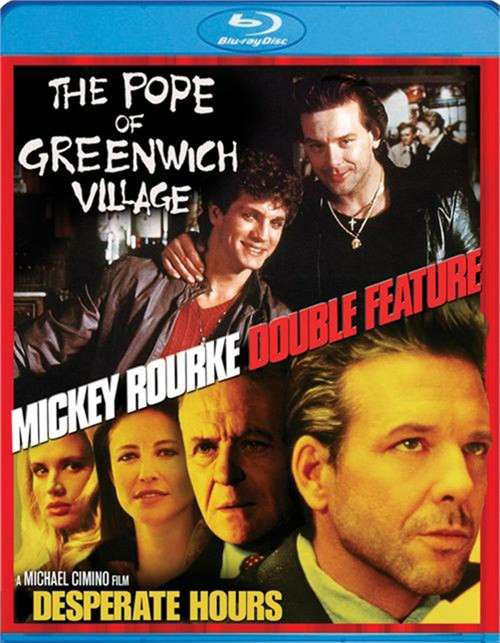 The Pope Of Greenwich Village

In New York's Little Italy, smooth-talking hustler Charlie (Rourke) works in a restaurant and dreams of one day buying his own with his girlfriend Diane (Hannah). His wiry wheeler-dealer cousin Paulie (Roberts) waits tables, skims money off checks and is always scheming to score big. But they're all about to pull a scam on the wrong guy - Bed Bug Eddie (Burt Young, Rocky), the Mafia king of Greenwich Village! Now these small time con men are in big-time trouble - trouble so big that even their mobster uncle might not be able to save them!

From Oscar winner Michael Cimino (1978 Best Director, The Deer Hunter) comes this taut psychological thriller about a family held hostage in their own home.

In dire need of a hideout, escaped convict Michael Bosworth (Rouke) uses his charming smile to gain entry into the posh home of Nora and Tim Cornell (Rogers and Hopkins) and their two children. While waiting for his beautiful lawyer- turned- accomplice (Lynch) to arrive, Bosworth's smile soon explodes into homicidal rage when the Cornells desperately try to fight back. Holding the family at gunpoint and ruthlessly pitting husband against wife, Bosworth's fury escalates into a shocking night of terror and cold-blooded murder. Finally, the family is f-rced to take a stand that will either destroy them... or unite them as never before.