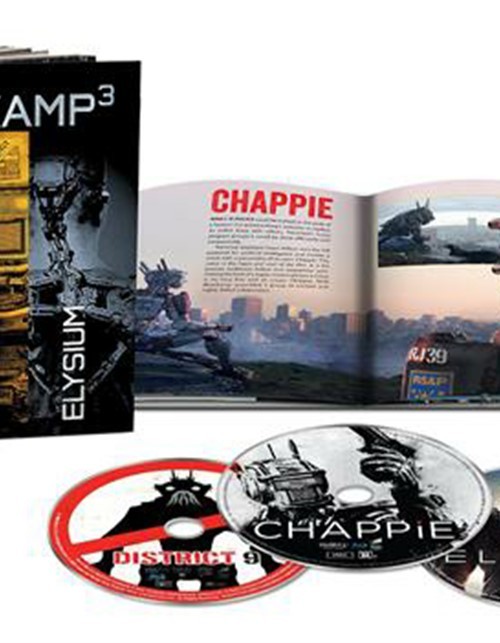 The world of Neill Blomkamp is unlike any other. Distinct of story and vision, and for the first time together in this limited edition Blu-ray set, District 9, Elysium and Chappie define Blomkamp as a true auteur. Relish in these action-packed hits with a new collection of extras, including limited-release special features on District 9 and Elysium, and an alternate ending and exploration of visual effects, weaponry and artificial intelligence on Chappie.

In the near future, crime is monitored by an oppressive mechanized police f-rce. But now, the people are fighting back. When one police droid, Chappie, is stolen and given new programming, he becomes the first robot with the ability to think and feel for himself. As powerful and destructive f-rces start to see Chappie as a danger to mankind and order, they will stop at nothing to maintain the status quo and ensure that Chappie is the last of his kind.

We are plunged into a world where aliens have landed... only to be exiled to a slum on the fringes of Johannesburg. Now, one lone human discovers the mysterious secret of the extraterrestrial weapon technology. Hunted and hounded through the bizarre back-alleys of an alien shantytown, he will discover what it means to be the ultimate outsider on your own planet.

In the year 2159, two classes of people exist: the very wealthy, who live on a pristine man-made space station called Elysium, and the rest, who live on an overpopulated, ruined Earth. Secretary Delacourt (Jodie Foster) will stop at nothing to preserve the luxurious lifestyle of the citizens of Elysium - but that doesn't stop the people of Earth from trying to get in by any means necessary. Max (Matt Damon) agrees to take on a life-threatening mission, one that could bring equality to these polarized worlds.

Reviews for "Blomkamp 3: Limited Edition (B"