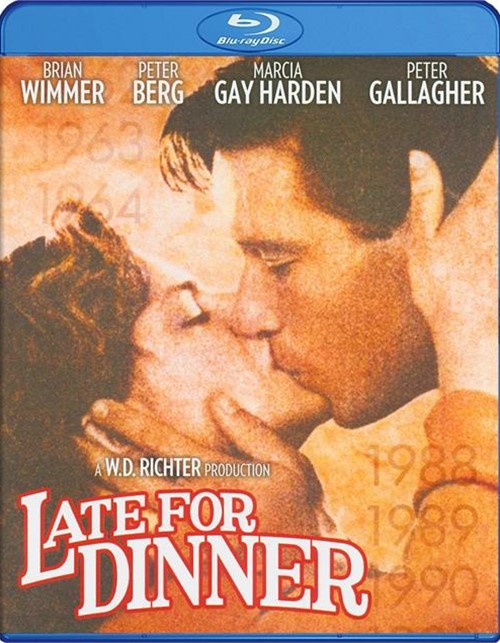 Late For Dinner is a charming, critically acclaimed old-fashioned romantic comedy that leaps through time into your heart. In the innocent days of 1962, Willie (Brian Wimmer, TV's China Beach) marries Joy (Marcia Gay Harden, Pollock), the girl of his dreams. But the young lovers' hopes are shattered when a sleazy land developer (Peter Gallagher, The Idolmaker) frames Willie and his best friend Frank (Peter Berg, The Last Seduction). On the run from a crime they didn't commit, the two buddies end up caught in the biggest chill ever: guinea pigs in a dangerous cryonics experiment. Frozen Alive! And they don't thaw out until 1991! Willie and Frank haven't aged a day but everything has changed. Even Willie's only love, who's now in her fifties. But if love does indeed conquer all, Willie and Joy will have the chance to share their once-in-a-lifetime romance... twice. The second and final film directed by writer W.D. Richter, the first was cult classic, The Adventures of Buckaroo Banzai Across the 8th Dimension.

Reviews for "Late For Dinner"