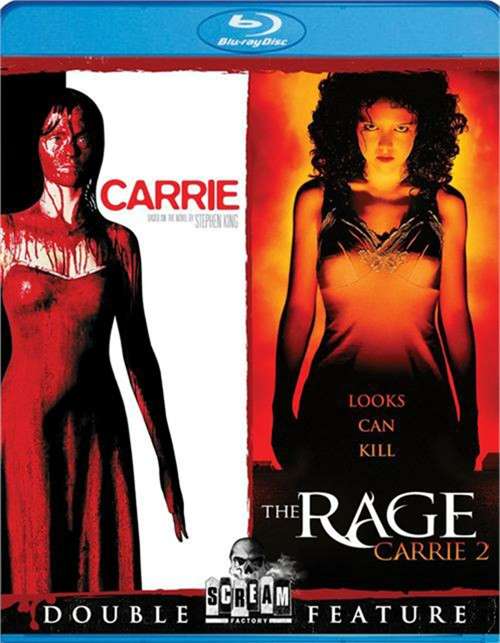 Angela Bettis (May) stars in this 2002 adaptation of Stephen King's classic tale of horror and retribution, featuring eye-popping special effects and a shocking, all-new twist ending! Carrie White (Bettis) is a lonely, awkward teenage girl who just doesn't fit in. At school, she endures her classmates' constant ridicule, and at home she suffers endless psychological at the hands of her fanatically religious mother (Patricia Clarkson, Six Feet Under). But Carrie has a secret. She's been cursed with the terrifying power of telekinesis. And when her tormenters commit an act of unforgivably cruel humiliation at the prom, theyll soon learn a deadly lesson. Taking its inspiration from King's book rather than the original film, Carrie was written by Bryan Fuller (TV's Hannibal, Pushing Daisies) and stars Emilie de Ravin (Lost), Katharine Isabelle (See No Evil 2, Ginger Snaps) and Chelan Simmons (Tucker & Dale Vs. Evil).

In this horrifying 1999 sequel, Rachel (Emily Bergl, The Knick) is a high school misfit who gets caught in the middle of a vicious prank orchestrated by a group of jocks that turns deadly. Once the police bring one of the boys in for questioning, his teammates target Rachel for squealing, and hatch a devious scheme to publicity humiliate her. But messing with Rachel is worse than playing with fire, for when her temper's crossed, it triggers a powder-keg of anger and unleashes horrifying powers that turn a wild teen house party into a wilder mad-house inferno! Also starring Jason London (Dazed And Confused), Rachel Blanchard (TV's Clueless), Mena Suvari (American Beauty) and Amy Irving (reprising her role as Sue Snell from Brian DePalma's original Carrie), this fast-paced, white-knuckle revenge fantasy takes telekinesis to the next level of terror!