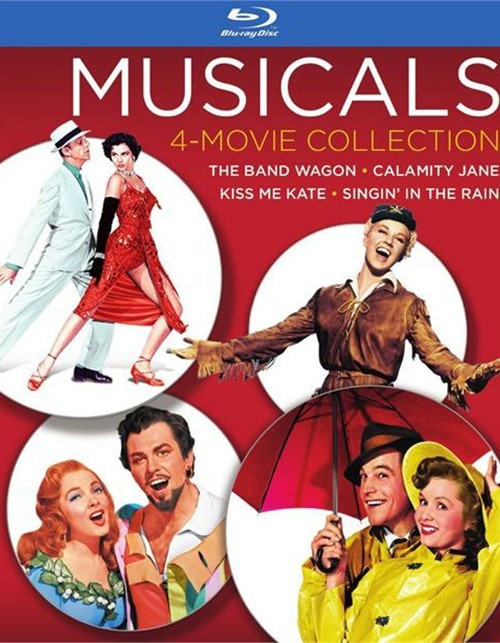 Fred Astaire and Cyd Charisse dazzle in director Vincente Minnelli's classic, featuring numbers set in a train station ("By Myself"), a penny arcade ('A Shine on Your Shoes"), a backlot Central Park ("Dancing in the Dark") and a smoky cafe ("The Girl Hunt"). As the hallmark song which originated here goes, "That's Entertainment!"

Doris Day and Howard Keel fuss, feud and fall in love as Calamity Jane and Wild Bill Hickok in this entertainment mother lode. There are wide-open Technicolor Western spaces, lots of high-stepping dances and a hummable humdinger of a score by Academy Award-winning songwriters Sammy Fain and Paul Francis Webster, who took their first Oscar for the classic ballad (and '50s megahit) "Secret Love."

When two squabbling ex-marrieds are cast as squabbling Renaissance romantics in a musical The Taming of the Shrew, life imitates art, art imitates life - and it all proves no musical comedy imitates Kiss Me Kate, adapted from the 1948 Broadway smash that features 14 peerless Cole Porter songs, choreography by Bob Fosse and Hermes Pan, and an all-star cast including Howard Keel, Kathryn Grayson and Ann Miller.

Singin' In The Rain

Silent movies are giving way to taking pictures - and a hoofer-turned-matinee idol (Gene Kelly) is caught in the bumpy transition, as are his buddy (Donald O'Connor), prospective ladylove (Debbie Reynolds) and shrewish costar (Jean Hagen). The musical masterwork Singin' in the Rain is celebrated with special features that salute not just this all-time favorite but also the musical legacy of its producer, songwriter Arthur Freed.