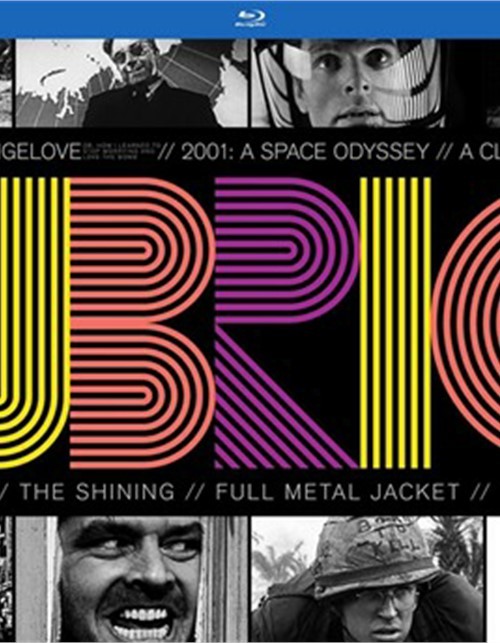 Disc 1 - Lolita (1962) Humbert (James Mason), a divorced British professor of French literature, travels to small-town America for a teaching position. He allows himself to be swept into a relationship with Charlotte Haze, his widowed and sexually famished landlady, whom he marries in order that he might pursue the woman's 14-year-old flirtatious daughter, Lolita, with whom he has fallen hopelessly in love, but whose affections shall be thwarted by a devious trickster named Clare Quilty.

Disc 2 - Dr. Strangelove or: How I Learned to Stop Worrying and Love the Bomb (1964) The cold war satire is a chilling dark comedy about a psychotic Air F-rce General unleashing an ingenious, foolproof and irrevocable scheme sending bombers to attack Russia, as the U.S. President works with the Soviet premier in a desperate effort to save the world. The film stars Peter Sellers, in multiple roles, as well as George C. Scott and Sterling Hayden.

Disc 3 - 2001: A Space Odyssey (1968) Kubrick's dazzling Academy Award-winning achievement (Special Visual Effects) is an allegorical puzzle on the evolution of man and a compelling drama of man vs. machine. Featuring a stunning meld of music and motion, the film was also Oscar-nominated for Best Director, Art Direction and Writing. The director (who co-wrote the screenplay with Arthur C. Clarke) first visits the prehistoric age-ancestry past, then leaps millennia (via one of the most mind-blowing jump cuts ever) into colonized space, and ultimately whisks astronaut Bowman (Keir Dullea) into uncharted space, perhaps even into immortality.

Disc 5 - Barry Lyndon (1975) Redmond Barry (Ryan O'Neal) is a young, roguish Irishman who's determined, in any way, to make a life for himself as a wealthy nobleman. Enlisting in the British Army and fighting in Europe's Seven Years War, Barry deserts, then joins the Prussian army, gets promoted to the rank of a spy, and becomes a pupil to a Chevalier and con artist/gambler. Barry then lies, dupes, duels and seduces his way up the social ladder, entering into a lustful but loveless marriage to a wealthy countess named Lady Lyndon (Marisa Berenson). He takes the name of Barry Lyndon, settles in England with wealth and power beyond his wildest dreams, before eventually falling into ruin.

Reviews for "Stanley Kubrick: The Masterpie"