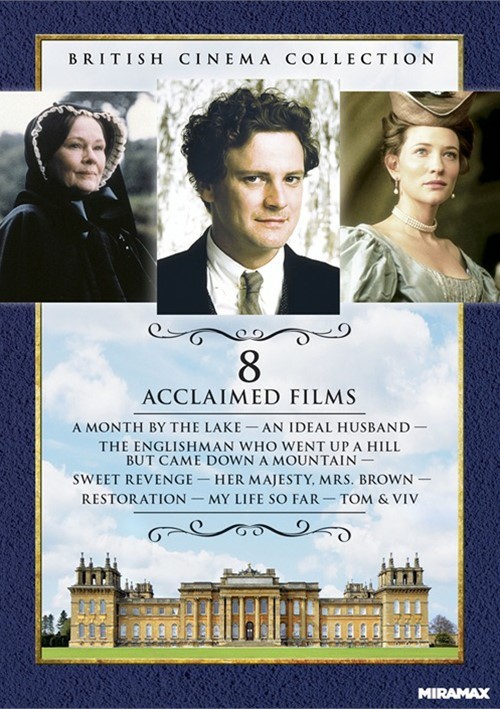 Restoration: Robert Merivel is a young man who seems to have everything...until a passionate affair leads to scandal, suddenly leaving him heartbroken and penniless. But it's only after losing it all that Merivel discovers who he really is and - becomes the man he never dreamed he could be. Also featuring Sam Neill, Ian McKellen and Hugh Grant in this critically acclaimed story you won't want to miss!

An Ideal Husband: Sir Robert (Jeremy Northam), is a highly respected politician whose spotless reputation is the pride of his beautiful wife (Cate Blanchett) and adoring sister (Minnie Driver). But when an old acquaintance (Julianne Moore) threatens to reveal a dark secret from Robert's past, only his womanizing, party-loving best friend Goring (Rupert Everett) is scheming and dishonest enough to come to his aid!

A Month By The Lake: At a luxurious lakeside resort, an attractive red-headed guest (Vanessa Redgrave) has her eye on a handsome, well-to-do bachelor. But when he's more interested in a beautiful young flirt (Uma Thurman), the mischievous redhead goes to outrageous lengths-including a fling with a passionate younger man-to reel in her wealthy catch!

My Life So Far: Young Fraser Pettigrew has always been an adventurous child. But with the arrival of his sexy French aunt Heloise, Fraser enters a truly eye-opening summer of discovery as he learns some delicious truths about childhood and the comic eccentricities of his loving family.

The Englishman Who Went Up A Hill But Came Down A Mountain: Hugh Grant stars as a young man who offends an entire town by declaring their mountain - a prized landmark - to be a "hill." But soon he finds the eccentric locals, led by a witty innkeeper (Colm Meaney) will stop at nothing to defend their honor! While the townspeople rally around their "mountain," a fiery young woman (Tara Fitzgerald) charms the puzzled out-of-towner into seeing things their way!

Sweet Revenge: A successful female lawyer (Carrie Fisher) decides to divorce her failed writer husband. He effectively sues her for alimony, based upon an agreement they had made that she would support him if he put her through law school. The only condition attached by the judge is that if he remarries then the alimony stops. She decides to get revenge by hiring an actress (Rosanna Arquette) to seduce him and get him to marry her.

Her Majesty, Mrs. Brown: Queen Victoria is deeply depressed after the death of her husband, disappearing from public. Her servant Brown, who adores her, through caress and admiration brings her back to life, but that relationship creates scandalous situation and is likely to lead to monarchy crisis.

Tom & Viv: In 1915, T.S. (Tom) Eliot and Vivienne Haigh-Wood elope, but her longstanding gynecological and emotional problems disrupt their planned honeymoon. Her father is angry because Tom's poetry doesn't bring in enough to live on, but her mother is happy Viv has found a tender and discreet husband.