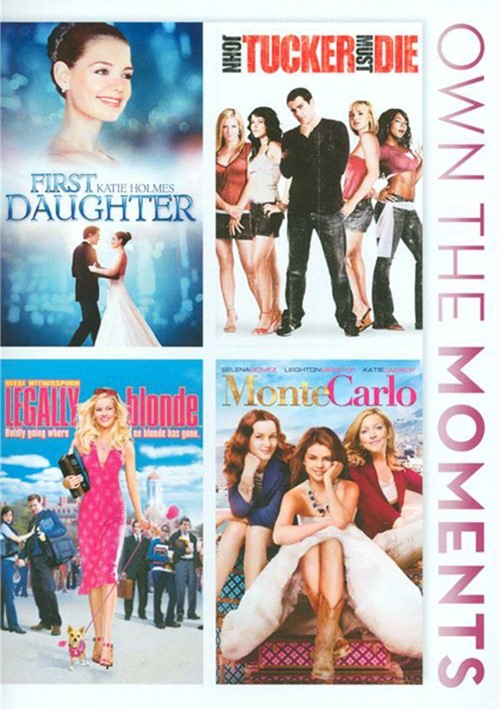 Once Upon A Time...there lived a lovely girl named Samantha. She had everything she could possibly wish for, and lived in a beautiful white house. The White House...Katie Holmes stars as Samantha Mackenzie - a sheltered young woman who just wants a normal school experience, away from the influence of her parents. Only trouble is, her dad (Michael Keaton) is the President of the United States! But nothing will stop her, so, under Secret Service surveillance and a nonstop media glare, Samantha meets - and falls hard for - a handsome college student...who has a secret existence of his own.

Hollywood's hottest young hunk, Jesse Metcalfe (TV's Desperate Housewives), delivers big laughs on campus in this "hot, hilarious film" (NBC-TV, Miami). When three gorgeous gals discover the've all been duped by smooth-talking stud John Tucker (Metcalfe), they hatch a devious revenge scheme to turn the tables on him. Now Tucker is going to have to change his ways...or the school jock will soon become the class joke! Can the tantalizing teen trio turn this "serial dater" into a one-woman man? Find out in the hit movie that proves revenge isn't just sweet, it's hysterically funny.

She's a California sorority girl who'll do anything to keep her man. Even if it means going all the way...to law school! Reese Witherspoon (Election) stars with Luke Wilson (Charlie's Angels), Selma Blair (Cruel Intentions), Matthew Davis (Pearl Harbor) and Victor Garber (Titanic) in a knock-out comedy with a heart of gold - and hair to match! Elle Woods (Witherspoon) is a California blonde with couture clothes, fabulous friends and the hottest boyfriend on campus. So when Warner Huntington III (Davis) suddenly dumps her and heads for Harvard Law School, Elle takes matters into her own perfectly manicured hands. She enrolls too! Now getting Warner back should be a snap, right? Wrong! Elle's about to begin the toughest fight of her life - for love, honor, justice and respect for blondes everywhere!

Get ready for an awesome adventure of a lifetime in Monte Carlo! Selena Gomez (Ramona And Beezus) lights up the screen as Grace, a high-spirited high school grad looking forward to a vacation in Paris with her best friend Emma (Katie Cassidy) and stepsister Meg (Leighton Meester). Just as the girls think their trip is ruined when their hyperactive tour guide leaves them behind, Grace is mistaken for a wealthy socialite and the trio is whisked away to Monte Carlo for a thrilling week of glitz, glam and unforgettable fun!