Medallion, The / Once Upon A Time in China / Legend Of the Red Dragon (Triple Feature) 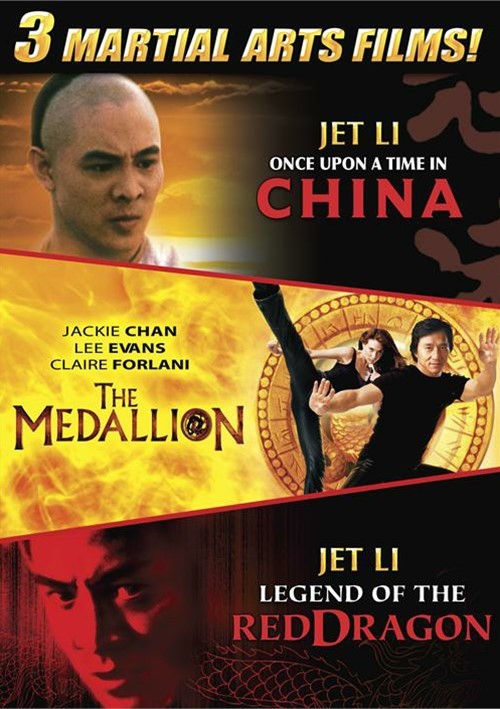 Medallion, The / Once Upon A Time in China / Legend Of the Red Dragon (Triple Feature)

Action superstar Jackie Chan (Rush Hour 2, Shanghai Knights) combines his high-flying style with state-of-the-art special effects as he unleashes the power of The Medallion, the film Roger Ebert gives a big 'thumbs up! Chan plays Hong Kong detective Eddie Yang, who works with the beautiful Interpol agent Nicole (Claire Forlani, Meet Joe Black and The Rock) and the bumbling agent Watson (Lee Evans of Mouse Hunt) to try to rescue a boy from the clutches of the villainous Snakehead (Warlock's Julian Sands). But when a fatal accident ends his life, Eddie is brought back to this world with the help of The Medallion and is supercharged! Now empowered with superhuman strength, Eddie sets out to thwart Snakehead's plan for world domination. Filmed on location in Hong Kong, Thailand, and Ireland. Jackie Chan has got the power and kicks The Medallion into high gear!

Once Upon a Time in China

China's been infected with a plague known as the Western world, and Wong Fei-hung (Jet Li) refuses to stand by and watch as his country is decimated by the foreign f-rces. A martial arts expert, Wong collides with the foreigners, their influence and, especially, their firearms. Leading his misfit militia, Wong is determined to stop the immoral slave trade that serves the California gold fields. When his favorite aunt is kidnapped to be sold as a prostitute, Wong must battle his countrymen and the superior firepower of the slave traders, all for the very soul of traditional China.

Legend of the Red Dragon

When his wife and entire village are brutally murdered by evil Manchu soldiers, the master warrior Kwun (Jet Li) sets out on a mission of vengeance with the only survivor of the massacre his son, Ting. For seven years, the two journey across ancient China on their quest for revenge, always staying one step ahead of the deadly army. But Kwun is f-rced to face the past when they come across a wealthy benefactor with five young Shaolin masters in his charge who, unbeknown to Kwun, have the detailed map to a priceless treasure trove tattooed on their backs. It is not long before Manchu officials find out about the maps and deadly soldiers come after the masters. Now, in an ancient battle that will pit Kwun against one of the very soldiers who helped to kill his family, he and Ting will unite with the young masters of Shaolin for a fight to the death. Get ready for an ancient martial arts battle with the world's most masterful warriors!

Review "Medallion, The / Once Upon A T"

Reviews for "Medallion, The / Once Upon A T"