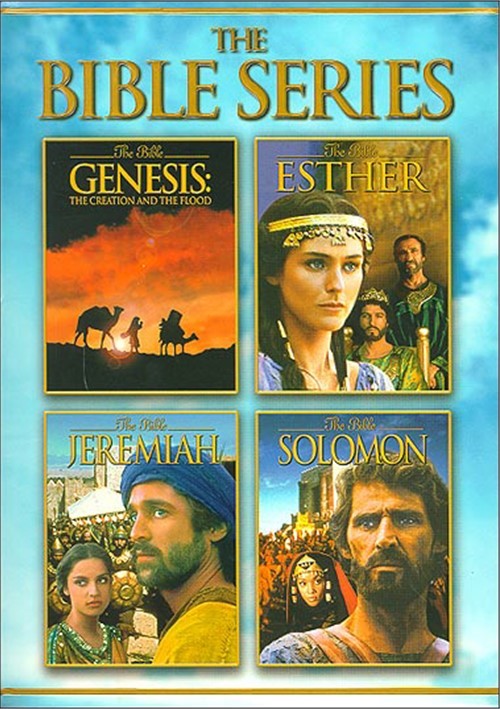 Experience the beauty and majesty of these extraordinary bible stories with brilliant productions that bring these epic tales to life. All four of these stories richly illustrate the strength, courage and weakness of mankind with sensitive and unforgettable performances. Beautifully filmed on location, featuring exceptional casts including Patrick Dempsey, Ben Cross, Vivica A. Fox, F. Murray Abraham and Jurgen Purchow.

The story begins with the creation of Man and Woman, the sin committed by Adam and Eve, and the temptation by the snake, which led to their banishment from Paradise. The story continues with the first crime committed by mankind, Cain's murder of his brother, the condemnation of God, mankind's corruption and evil, and God's regret for having created earth. The choice of Noah, a just and upright man, to build the Ark, the flood and its clearing they way for a new mankind, the pact of the eternal Covenant between God and all living beings, are told through the clear and simple words of an old nomad shepherd.

Following the conquest of Babylon, the King of Persia gives a banquet for his people at which he requests the presence of his wife, Vashti. As she refuses the King's demand, Ahasuerus disowns Vashti and goes in search of her replacement. In his harem, he meets the young girl Esther who immediately captivates him with her charm and beauty. Unaware of her Jewish heritage, King Ahasuerus falls in love with Esther. Esther then reveals to Ahasuerus that she is Jewish and asks him to show her people mercy, because of a planned genocide of the Jews by the King's right-hand man, Haman. In doing so, she saves the lives of many innocent people and paves the way for their return to Jerusalem.

Jeremiah tells the story of the prophet who abandons his family and the woman he loves, in order to relay God's message in Jerusalem. Although he is persecuted and branded as a traitor for warning others of the destruction of the Holy City, he continues fearlessly with his mission. When his prophecy is fulfilled, he experiences first-hand Jerusalem's destruction by the Babylonians.

Defeating his older brother, Solomon is crowned King of Israel and rules the land with love, peace and respect. While visiting the city, Solomon meets the beautiful Queen of Sheba and falls in love at first sight. When the time comes for her to return to her homeland, Solomon is unable to convince her to stay. Bereft of her beauty and companionship, he falls into a deep depression, departing from his idyllic world of peace and luxury while his kingdom threatens to collapse.