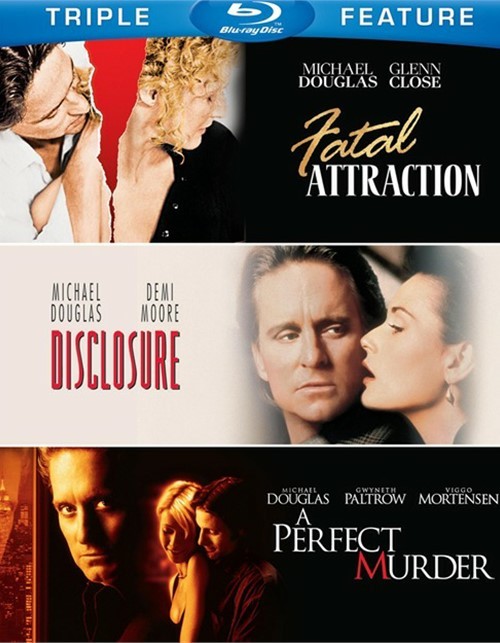 Stylish and sexy, Fatal Attraction took audiences to terrifying new heights with its thrilling story of a casual encounter gone terribly awry. This box office smash stars Michael Douglas as Dan Gallagher, a New York attorney who has a tryst with seductive Alex Forrest (Glenn Close) while his wife(Anne Archer) is away. Dan shrugs off the affair and considers it over. But Alex wont be ignored. Not now, not tomorrow, not ever - even if it means destroying Dan's family to keep him.

His career. His marriage. His future. It's all on the line for DigiCom executive Tom Sanders (Michael Douglas). After rejecting the advances of his new boss (Demi Moore), he's charged with sexual harassment. Suddenly the company man must scramble for his corporate life and, in the process, he stumbles upon a shocking conspiracy among key company personnel. Based on the best-selling book by Michael Crichton, Disclosure hotwires you to one exhilarating buzz after another.

Wall Street titan Steven Taylor seems like a devoted husband. He isn't. Beautiful Emily Bradford Taylor seems like a faithful wife. She isn't. And when Steven hires Emily's lover to kill her, it seems like A Perfect Murder. It isn't. In fact, little is what it seems in this sleek thriller. Michael Douglas, Gwyneth Paltrow and Viggo Mortensen star in A Perfect Murder, inspired by the play Dial M for Murder, filmed by Alfred Hitchcock in 1954. Fans of that classic will be in for a lot of surprises. So will Steven. At each unexpected twist in his plot, he improvises brilliantly. But can he always stay one step ahead?