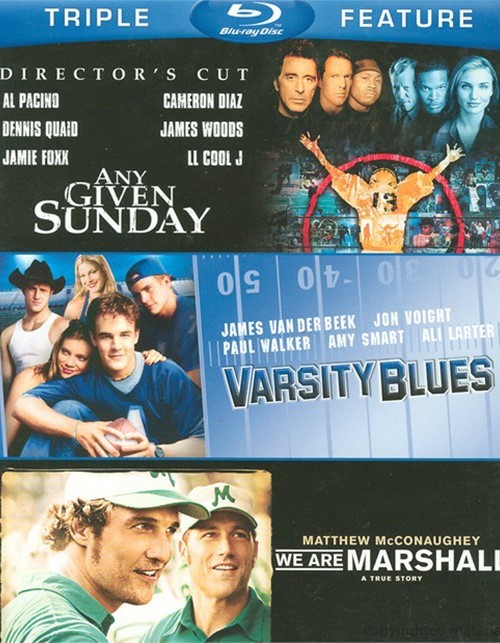 Any Given Sunday: Director's Cut

Oliver Stone and a dynamic acting ensemble explore the fortunes of an embattled NFL team in this explosive thriller. Coach Tony D'Amato (Al Pacino) faces team strife and a new owner (Cameron Diaz) who is sure Tony is way too old school. An injured quarterback (Dennis Quaid), a flashy, bull-headed backup QB (Jamie Foxx), a slithery team doctor James Woods) and a running back with an incentive-laden contract (LL Cool J) also fuel this riveting journey into the heart of an American institution.

When first string quarterback Lance (Paul Walker) injures himself, second string player "Mox" (James Van Der Beek) reluctantly steps in. Always content with his position on the bench, Mox is suddenly thrown into the spotlight and f-rced to deal with his win-at-all-costs coach (Jon Voight), his disapproving girlfriend (Amy Smart), a gorgeous cheerleader (Ali Larter), and an entire football-crazed community.

Life hit the West Virginia town of Huntington and its Marshall University hard. When it did, Jack Lengyel (Matthew McConaughey) came to help pull them onto theory feet by taking the job no one wanted: rebuilding the Marshall football program only months after a plane crash wiped out Marshall's beloved Thundering Herd. While the inexperienced players' chances of victory are slim to none, their true-life story of heart, healing and football will thrill and inspire you.