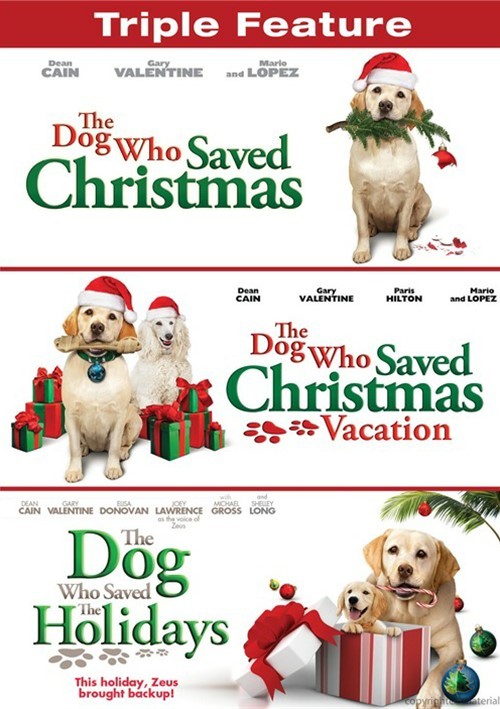 The Dog Who Saved Christmas

The Bannister family's new addition, Zeus (voiced by Mario Lopez), a former K-9 police hero, is a less than dependable guard dog; however, when two burglars (led by Dean Cain) aim to break into the family's home while they're away for Christmas Eve, Zeus seizes his chance to be a hero again, proving every dog - even this one - has his day.

The Dog Who Saved Christmas Vacation

Zeus and the Bannister family are back for the holidays! This time, the family must deal with a surprise visit from Uncle Randy (Casper Van Dien), his foxy poodle Bella (voiced by Paris Hilton) and a familiar pair of jewel thieves. Can Zeus solve a crime and save Bella, all in time for Christmas Day? Gary Valentine (King of Queens) and Elisa Donovan (Sabrina the Teenage Witch and Clueless) co-star in this four-legged family adventure sequel!

The Dog Who Saved The Holidays

It's a sun-soaked holiday season for the Bannister family as they travel to Southern California to stay with Aunt Barbara (Shelley Long), who surprises them with a new puppy named Eve (voiced by Peyton List of "Jesse" and Diary of a Wimpy Kid). Everyone is smitten with Eve - except for the Bannister's dog, Zeus (voiced by Joey Lawrence), who sees what a mischievous animal she is when no one else is around. After deciding to run away, Zeus sees Ted and Stewey, two thrifty thieves, trying to break into the family home while the Bannisters are at church. It's up to Zeus and his newest sister Eve to join together to save the holidays for their family!

Review "Dog Who Saved Christmas, The /"

Reviews for "Dog Who Saved Christmas, The /"