Days Of The Commune, The 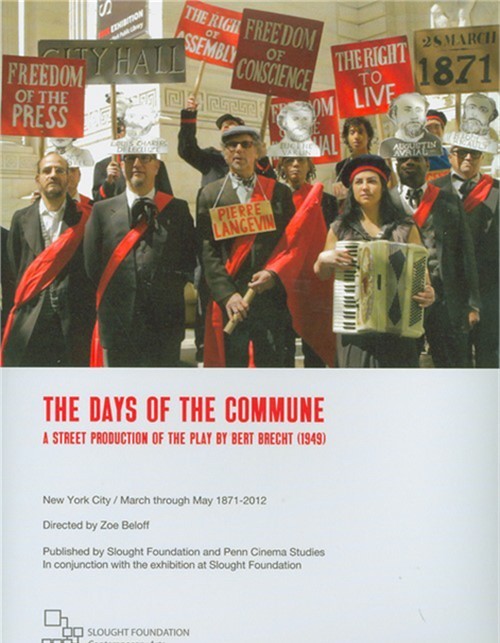 Days Of The Commune, The

In the spring of 2012, Zoe Beloff brought together a group of actors, activists and enthusiasts to perform Brecht's play The Days of the Commune (1949) in solidarity with Occupy Wall Street. Thinking about Occupy as a radical theater of the people, Beloff conceptualized this project as a "work in progress". Rather than stage the play in a theater, the group performed the work, scene by scene, in public spaces around New York City, starting in Zuccotti Park. These public rehearsals ran from March through May, the months of the Paris Commune's brief existence in the spring of 1871. The Paris Commune was the first great modern Occupation, where workers turned their city into a progressive democracy of the people.

Bringing this movement into dialogue with Brecht's radical restaging, and with contemporary social movements, Beloff asks us to image new possibilities for changing the world in the face of seemingly impossible odds.

This publication features the complete documentary of the public rehearsal of The Days Of The Commune. It includes a high-definition Blu-ray Disc and a booklet featuring Zoe Beloff and Jonathan Kahana in conversation about the origin of the project and its relation to contemporary anti-capitalist art, media and activism.

Review "Days Of The Commune, The"

Reviews for "Days Of The Commune, The"