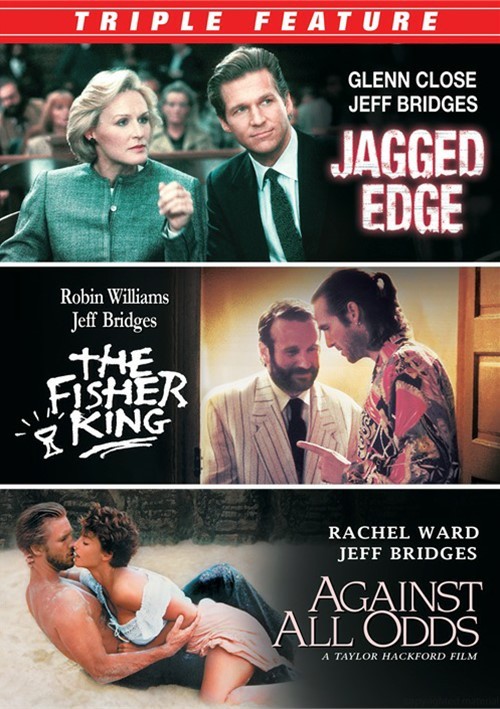 A razor-sharp suspense thriller about crime, punishment and passion. Jeff Bridges is the prime suspect and Glenn Close plays the attorney who falls in love with him. When a San Francisco socialite is viciously murdered, her publisher-husband, Jack Forrester (Bridges), is accused of committing the crime. Teddy Barnes (Close) decides to defend the charming, manipulative Jack, only to disregard legal ethics by having an affair with him. With the help of private eye Sam Ransom (Robert Loggia), she takes on a ruthless District Attorney (Peter Coyote) who's using the case as a political stepping stone. However, a startling revelation puts Teddy in jeopardy of becoming the next victim of the Jagged Edge.

Dark passions explode in this steamy, sinister love story starring Rachel Ward and Jeff Bridges. Terry Brogan (Bridges), a cynical ex-football star, is hired to find Jessie Wyler (Ward), the runaway mistress of a ruthless L.A. nightclub owner, Jake Wise (James Woods). According to Jake, Jessie had stabbed him and vanished with $50,000. But Terry's mission is soon forgotten when he tracks down and falls in love with the beautiful Jessie on a Mexican island. Trouble brews, however, when Jake dispatches his henchman, Hank Sully (Alex Karras), to bring the lovers back. Driven by passion for the mysterious young woman, Terry quickly finds himself trapped in a complex web of corruption, betrayal, and murder. Packed with riveting excitement and vivid sensuality, Against All Odds grabs you and never lets you go.

Robin Williams, Jeff Bridges, Amanda Plummer and Mercedes Ruehl star in Terry Gilliam's must-see comic masterpiece. Williams is Parry, a homeless history professor who lives in a fantasy world full of castles, Red Knights and damsels in distress. Bridges co-stars as Jack, New York's #1 shock deejay, whose off-hand arrogance triggers a tragedy which ruins his career. Penniless and without prospects, Jack finds himself plucked from disaster by the most improbable of saviors... Parry. And so the amazing story of the Fisher King unfolds a modern quest for redemption and the Holy Grail, filled with humor, heartbreak and ravishing romance. "Truly a great movie" (Joel Siegel).

Review "Jagged Edge / Against All Odds"

Reviews for "Jagged Edge / Against All Odds"