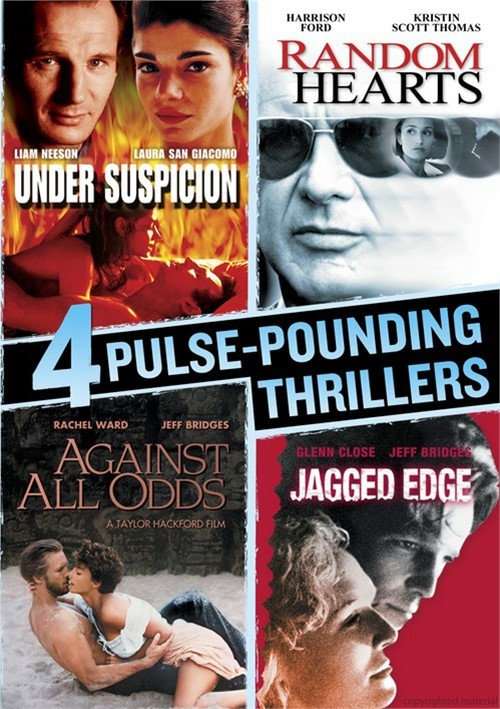 Two people come together in a dangerous liaison turned deadly affair. This is the provocative premise for Under Suspicion, a brilliantly crafted thriller starring Academy Award nominee Liam Neeson (Best Actor in a Leading Role, Schindler's List, 1993) and Laura San Giacomo (TV's Just Shoot Me). Tony Aaron (Neeson) is a private eye who makes his living setting up phony adultery cases with the help of his wife. But a routine set up fatally backfires when Tony's wife and his client - a wealthy artist are murdered. At first, all clues point to the artist's mysterious mistress, Angeline (San Giacomo), but Tony is also named as a prime suspect. Both maintain their innocence, and guilt seems even harder to assign when the two plunge into a steamy, forbidden affair. One is guilty, the other is innocent - but the real killer might ultimately get away with murder.

From Sydney Pollack, the Academy Award-winning producer and director of Out of Africa, comes this passionate romantic thriller with a stellar cast. Dutch Van Den Broeck (Harrison Ford) plays an Internal Affairs sergeant who becomes entangled with, Kay Chandler (Kristin Scott Thomas) a high-powered Congresswoman when an airplane crash kills both their spouses. Dutch soon discovers that it was more than coincidence that had their spouses on the same plane- it was an affair. Details of the affair anger Kay, who is determined to protect both her daughter and her political career. As the story unfolds, she finds herself unable to resist being drawn into Dutch's investigation, and the passion they find in each other brings about the most unexpected discovery of all.

Dark passions explode in this steamy, sinister love story starring Rachel Ward and Jeff Bridges. Terry Brogan (Bridges), a cynical ex-football star, is hired to find Jessie Wyler (Ward), the runaway mistress of a ruthless L.A. nightclub owner, Jake Wise (James Woods). According to Jake, Jessie had stabbed him and vanished with $50,000. But Terry's mission is soon forgotten when he tracks down and falls in love with the beautiful Jessie on a Mexican island. Trouble brews, however, when Jake dispatches his henchman, Hank Sully (Alex Karras), to bring the lovers back. Driven by passion for the mysterious young woman, Terry quickly finds himself trapped in a complex web of corruption, betrayal, and murder. Packed with riveting excitement and vivid sensuality, Against All Odds grabs you and never lets you go.

A grisly homicide... a sensational trial... a forbidden affair it's Jagged Edge, a razor-sharp suspense thriller about crime, punishment and passion. Jeff Bridges is the prime suspect and Glenn Close plays the attorney who falls in love with him. When a San Francisco socialite is viciously murdered, her publisher-husband, Jack Forrester (Bridges), is accused of committing the crime. Teddy Barnes (Close) decides to defend the charming, manipulative Jack, only to disregard legal ethics by having an affair with him. With the help of private eye Sam Ransom (Robert Loggia), she takes on a ruthless District Attorney (Peter Coyote) who's using the case as a political stepping stone. However, a startling revelation puts Teddy in jeopardy of becoming the next victim of the Jagged Edge. -

Reviews for "Under Suspicion / Random Heart"