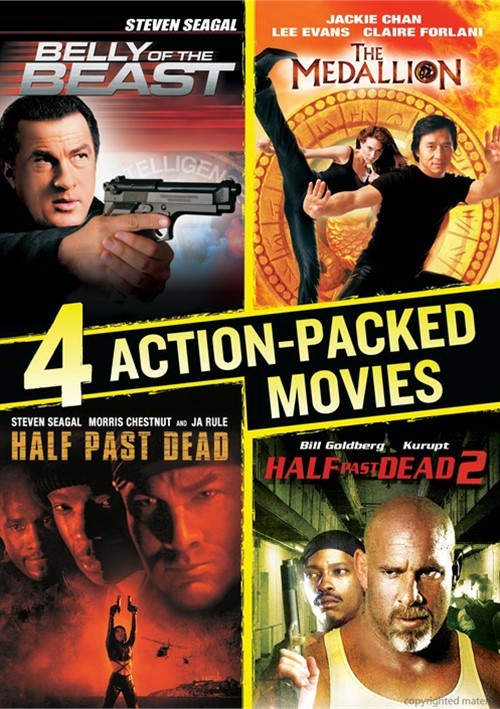 Belly Of The Beast

Steven Seagal is Jake Hooper, once an operative on the inside on his way to retirement, when he receives some startling news. While vacationing in Thailand, his daughter has been kidnapped by a notorious terrorist group, Abu Karaf. The C.I.A. launches an attack mission to save her, but that's not good enough for Hopper. He has never been one to play by the rules and this time there are no rules.

Welcome to Alcatraz. "The Rock" has just re-opened for business, but the first criminal slated for the electric chair is also sitting on a secret worth $200 million. And an invading group of commandos (led by Morris Chestnut) isn't going to let his fortune go up in smoke. Already undercover in Alcatraz, FBI Agent Petrosevitch (Steven Seagal) has to neutralize the situation and rescue a Supreme Court Justice held hostage. Worse, he has to convince his convict "partner" (Ja Rule) and the other inmates to fight on the right side of the law.

Former WWE and WCW World Champion Bill Goldberg and hip-hop group Tha Dog Pound's Ricardo "Kurupt" Brown push life to the limit in this explosive sequel to the 2002 hit movie Half Past Dead. Burk (Goldberg) and Twitch (Kurupt) are two inmates serving time at Craton Prison, a notoriously though and violent penitentiary ruled by rival gangs. When a riot breaks out and the prison goes into lockdown, the two must form an unlikely alliance to stay alive.

Action superstar Jackie Chan (Rush Hour 2, Shanghai Knights) combines his high-flying style with state-of-the-art special effects as he unleashes the power of The Medallion, the film Roger Ebert gives a big 'thumbs up! Chan plays Hong Kong detective Eddie Yang, who works with the beautiful Interpol agent Nicole (Claire Forlani, Meet Joe Black and The Rock) and the bumbling agent Watson (Lee Evans of Mouse Hunt) to try to rescue a boy from the clutches of the villainous Snakehead (Warlock's Julian Sands). But when a fatal accident ends his life, Eddie is brought back to this world with the help of The Medallion and is supercharged! Now empowered with superhuman strength, Eddie sets out to thwart Snakehead's plan for world domination. Filmed on location in Hong Kong, Thailand, and Ireland. Jackie Chan has got the power and kicks The Medallion into high gear!

Review "Belly Of The Beast / Half Past"

Reviews for "Belly Of The Beast / Half Past"