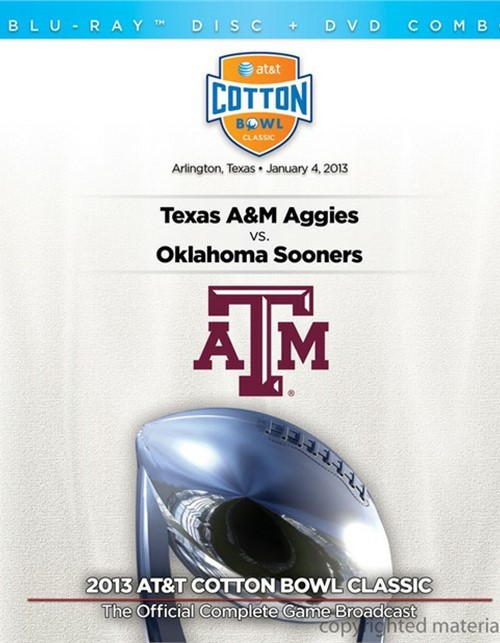 After making a splash in their first season in the Southeastern Conference, the Aggies of Texas A&M faced an old Big 12 foe in the AT&T Cotton Bowl in the Oklahoma Sooners. Heisman Trophy-winning quarterback Johnny Manziel picked up right where he left off in the regular season, racking up over 500 total yards to help Texas A&M down OU by a final score of 41-13 at Cowboys stadium in Arlington.

Manziel found the end zone on a pair of rushing touchdowns in the first half, but two field goals from Oklahoma's Michael Hunnicut and a six-yard score from Justin Brown kept the Sooners within one point at the break. But after the half, it was all Aggies.

Texas A&M running back Ben Malena struck first in the third quarter with a seven-yard touchdown scamper, which Trey Williams followed up with a 30-yard scoring run of his own. Later in the third, Manziel found Ryan Swope on the outside for a 33-yard score, before capping the scoring early in the fourth on another bomb to Uzoma Nwachukwu for the touchdown.

The Aggies stymied the Sooners after the half, holding quarterback Landry Jones and company off the scoreboard in the final 30 minutes of action. Manziel dazzled as he had all season long, wrapping up the game with 516 total yards - 287 through the air and the FBC bowl record 229 yards on the ground - to go along with four total touchdowns, capping off his Heisman season in dramatic fashion.

Celebrate the Aggies' Cotton Bowl victory with the 2012 AT&T Cotton Bowl DVD/Blu-ray Como Pack, it is a great addition to any Texas A&M fan's collection!