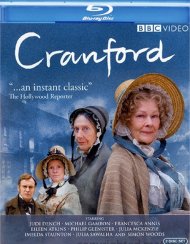 An all-star cast including Judi Dench, Michael Gambon, Eileen Atkins, Imelda Staunton and more come together in this BBC/Masterpiece Classic drama adapted from the works of Elizabeth Gaskell.

However, the town still has its secrets, despite the most vigilant eyes and ears. While it seems that life has always been conducted according to social rules, Cranford is on the cusp of change...

The Making Of Cranford