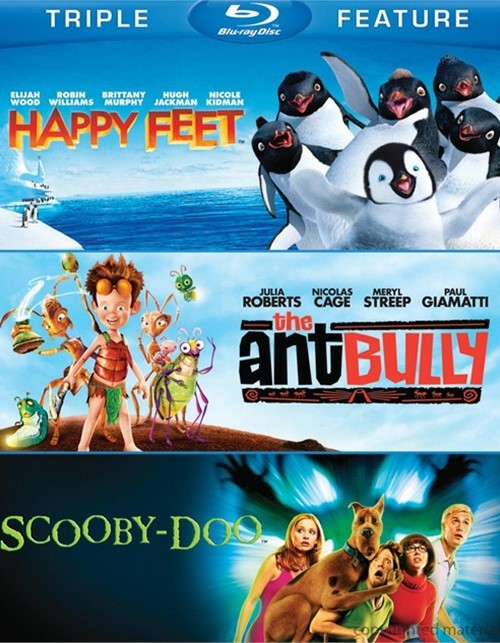 Emperor penguins are born to sing. All except young Mumble, who was born to dance. His un-penguin-like behavior eventually gets him kicked out of Emperor Land and into the big, cold world. Joined by his Adelie Amigos and a savvy Rockhopper penguin named Lovelace, Mumble embarks on an epic journey and ultimately proves that being yourself can make all the difference in the world!

When you're as small as an ant, the world is big - and adventure is bigger! That's what young Lucas discovers after he aims his water pistol at some hapless ants. They retaliate with a secret potion that shrinks "the Destroyer" to their size... and turns an anthill into a mountain of thrills, action and laughs! Julia Roberts, Nicolas Cage, Meryl Streep and Paul Giamatti head the voice cast of this rollicking, warm-hearted family treat.

Two years after a clash of egos f-rced Mystery Inc. to close, Scooby-Doo and his crime solving cohorts Fred, Daphne, Shaggy and Velma are individually summoned to Spooky Island to investigate a series of paranormal incidents. Worried his theme park might truly be haunted, island owner Emile Mondavarious drafts the detectives to solve the mystery before his supernatural secret scares away the crowds. Can the gang overcome personal differences to crack the case, save themselves and possibly the world? Ruh-roh!