Miramax From Dusk Till Dawn Series 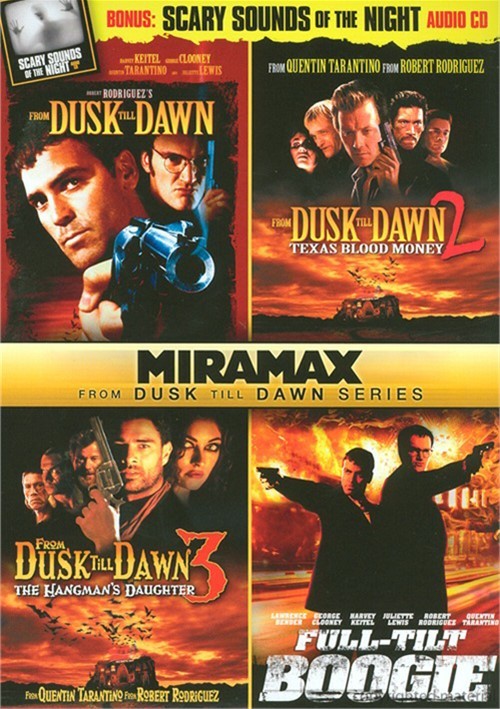 Miramax From Dusk Till Dawn Series

After kidnapping a father and his two kids, the Gecko brothers (George Clooney & Quentin Tarantino) head south to a seedy Mexican bar to hide out in safety. But when they face the bar's truly notorious clientele, they're f-rced to team up with their hostages in order to make it out alive.

A bank-robbing gang of misfits heads to Mexico with the blueprints for the perfect million-dollar heist. But when one of the crooks wanders into the wrong bar, and crosses the wrong vampire, the thieving cohorts develop a thirst for blood to match their hunger for money.

From Dusk Till Dawn 3: The Hangman's Daughter

Outlaw Johnny Madrid is on the run from the hangman . . . with the hangman's sensuous daughter Esmeralda by his side. Along with Madrid's gang, Johnny and Esmeralda embark on an adventure that leads them straight into the fight of their lives.

Go behind the scenes of the Robert Rodriguez cult classic, From Dusk Till Dawn, with this brilliant documentary. See just what it takes to make a big-budget movie, as well as what it's like to be on set with such stars as Quentin Tarantino, George Clooney and Juliette Lewis.

Scary Sounds Of The Night CD

Reviews for "Miramax From Dusk Till Dawn Se"