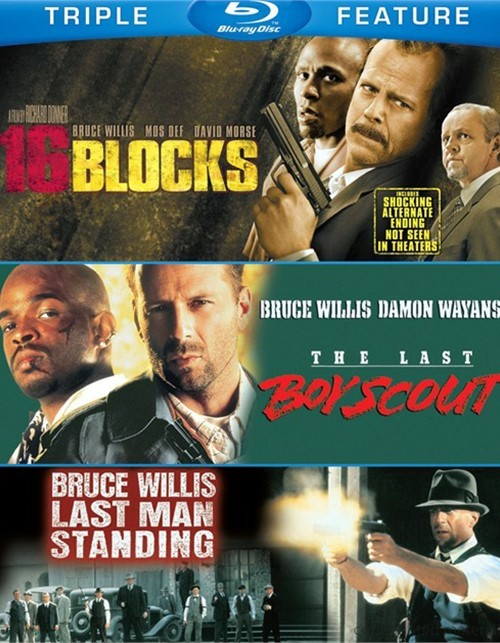 Bruce Willis hits the mark as Jack Mosley, a broken-down New York City police detective assigned to escort the petty criminal (Mos Def) from the precinct to the courthouse. The seemingly simple 16-block journey becomes a test of character when Jack's ex-partners attempt to stop them. From Lethal Weapon director Richard Donner.

Bruce Willis is a burned-out detective tackling corruption inside pro football, and the deadly line of scrimmage stretches all across L.A. Damon Wayans stars as a disgraced quarterback, Halle Berry costars, and director Tony Scott (Top Gun) ramps up the punches and punch lines. The Last Boy Scout is a flat-out blitz of excitement, blow-you-away special effects and hilarious humor set against the world of pro football.

Bruce Willis is John Smith, a tight-lipped man of mystery with a gun in each hand and an endless supply of ammo. A Prohibition-era gang war has driven away most of the townspeople of Jericho, and Smith realizes he can profit by working both sides of the feud. Christopher Walken and Michael Imperioli add to the action arsenal, directed with flair by Walter Hill (48 Hrs.) in a story previously captured on film in Yojimbo and A Fistful Of Dollars.