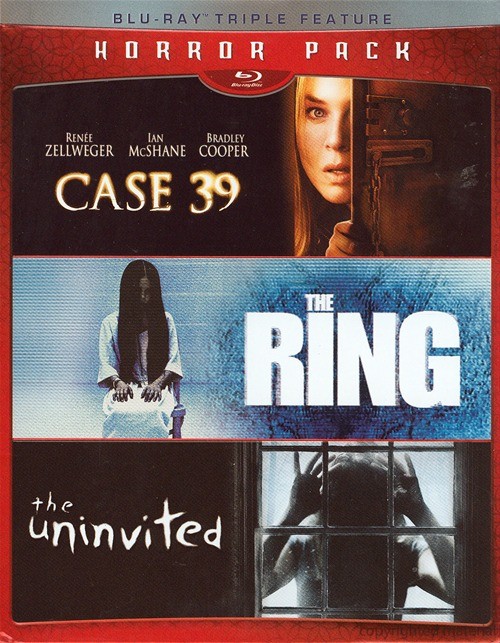 Academy Award winner Renee Zellweger stars in this terrifying supernatural thriller about a social worker who has been assigned the unusual and disturbing case of Lillith Sullivan... a girl with a strange and mysterious past. When Emily (Zellweger) opens her home in an attempt to help Lillith, it turns into a deadly nightmare she may not survive. Co-starring Bradley Cooper (The Hangover), Case 39 is a heart-stopping chiller with startling surprises that lead to a shocking and sinister ending.

It begins as just another urban legend - the whispered tale of a nightmarish videotape that causes anyone who watches it to die seven days later. But when four teenagers all meet with mysterious deaths exactly one week after watching just such a tape, investigative reporter Rachel Keller (Naomi Watts) tracks down the video... and watches it. Now, the legend is coming true, the clock is ticking and Rachel has just seven days to unravel the mystery of The Ring.

Following the suspicious death of their mother, sisters Anna and Alex become entangled in a deadly battle of wills when their father becomes engaged to Rachel, their mother's former caretaker. As the two sisters investigate Rachel's questionable past, they are confronted with ghostly visions, terrifying nightmares and deadly consequences. All leading to an ending so shocking it will "send chills down your spine~" - Pete Hammond, <I>Hollywood.com</i>

Case 39
Filed Under Evil: Inside Case 39
Inside the Hornet's Nest
Playing With Fire
Deleted Scenes

Reviews for "Horror Pack, The"