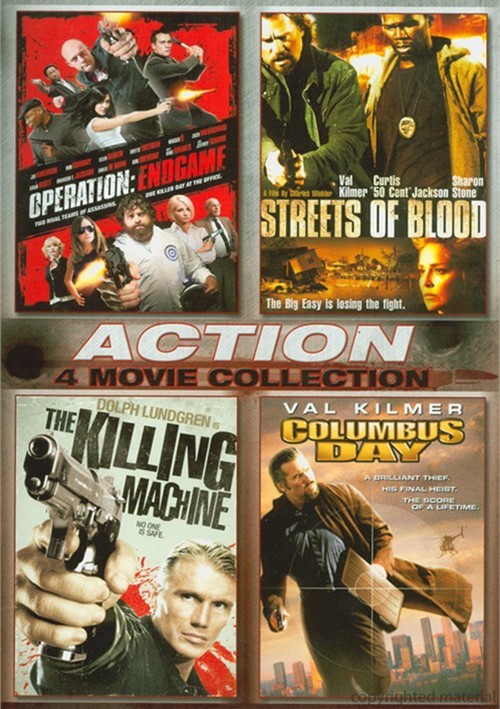 Miles beneath the streets of Los Angeles lies the heavily fortified headquarters of 'The Factory', an elite espionage cell unacknowledged by the U.S. government, stuffed with files on shocking covert actions and balanced by competing teams of lethal operatives. But when a rogue agent murders their boss, the facility's lockdown self-destruct mechanism is instantly activated. Now the clock is ticking, the only escape route is on sight.

It's New Orleans, six months after Hurricane Katrina ripped through the streets, destroying everything in her path. The floodwaters have quelled, but the death toll is on the rise, and the torrent of blood rages on. Now for a veteran detective (Val Kimer) with a viciously brutal past, his new partner (Curtis "50 Cent" Jackson) with a dark secret, and a department shrink (Sharon Stone) who knows the city's voices all too well, crime and corruption in the Big Easy are about to go to all new levels of depravity. In a town struggling to put the pieces back together, can anyone stop the barrage of dirty cops and the obscenely brutal drug war that threatens it all? Michael Biehn (The Terminator, Aliens) co-star in this pulse-pounding tour-de-f-rce from the makers of Rambo and 16 Blocks.

After the heist of his life, a thief hides out in a city park as he plans to strike a deal and unload the stolen goods. There, he behinds an unusual friendship with a precocious boy, prompting him to each via phone to his ex-wife and estranged daughter, who he hopes will reunite with him now that he about to be rich. As his business deal begins to unravel, he fights to keep the kid out of harm's way and escape to Florida to join up with his family.

If you thought he was hardcore in The Expendables, he's now totally unstoppable as The Killing Machine. Action icon Dolph Lundgren (Rocky IV, Universal Soldier) stars as Edward Genn, a divorced Vancouver father and investment broker who also happens to be the infamous KGB-trained assassin known as "Icarus." But when his two worlds collide in a storm of bullets, bloodshed and betrayal by the Russian Mob, Icarus reloads for the most personal - and punishing - contract of his entire career. When revenge is not enough, how far will a one-man death squad go to get even? Stefanie Von Pfetten, Samantha Ferris (Supernatural) and Bo Svenson (Inglorious Basterds, Walking Tall) co-star in this bone-snapping, skull-blasting, badass throwback to extreme '80s action movies, directed by Lundgren himself!

Streets Of Blood
Features Not Specific