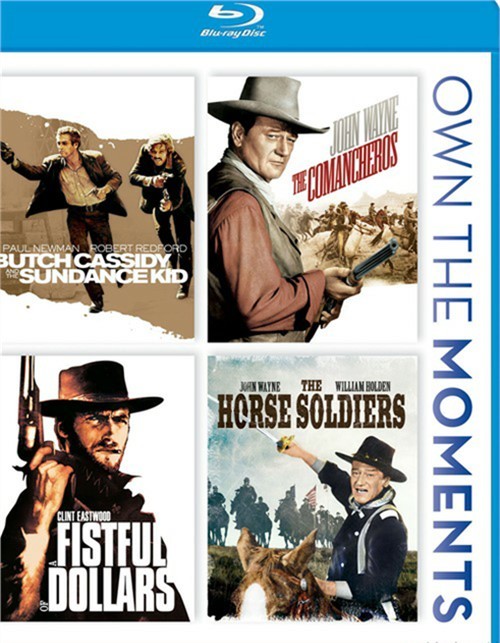 Butch Cassidy And The Sundance Kid

Settle back with your favorite sidekick and enjoy Hollywood's original buddy picture. Paul Newman and Robert Redford have never shined brighter in the roles that will forever identify them as the daring, debonair outlaws on the run - and head over-heels in love with the same beautiful woman (Katharine Ross).

Academy Award-Winning legend John Wayne lays down the law and heats up the screen in this 50th Anniversary Blu-ray Edition of The Comancheros.

Determined to bring down a violent gang of gunrunners known as Comancheros, a fearless Texas Ranger (Wayne) forms an uneasy alliance with a notorious outlaw gambler (Stuart Whitman), and the unlikely partners soon realize they must find common ground if they're going to stay alive!

Oscar-Winner Clint Eastwood blends a quiet steadiness with a palpable ferocity as the iconic gunslinger "The Man With No Name" in Sergio Leone's gritty "spaghetti western." When a steely blue-eyed mercenary arrives in a dusty border town where two rival bands of smugglers terrorize the impoverished citizens, he pits the gangs against each other in one of the most exhilarating frontier adventure films in cinema history.

John Wayne teams with William Holden and eminent western director John Ford for the frontier actioner "packed with laughter, romance and thrills" (The Hollywood Reporter)! Written by John Lee Mahin and Martin Rackin, this faithful representation of one of the most daring cavalry exploits in history is both a moving tribute to the men who fought and died in that bloody war, and a powerful, action-packed drama.

Based on an actual Civil War incident, The Horse Soldiers tells the rousing tale of a troop of Union Soldiers who f-rce their way deep into Southern territory to destroy a rebel stronghold at Newton Station. In command is hardbitten Colonel Marlowe (Wayne), a man who is strikingly contrasted by the company's gentle surgeon (Holden) and the beautiful but crafty Southern belle (Constance Towers) who's f-rced to accompany the Union raiders on perhaps the most harrowing mission in the war.

Review "Butch Cassidy And The Sundance"

Reviews for "Butch Cassidy And The Sundance"