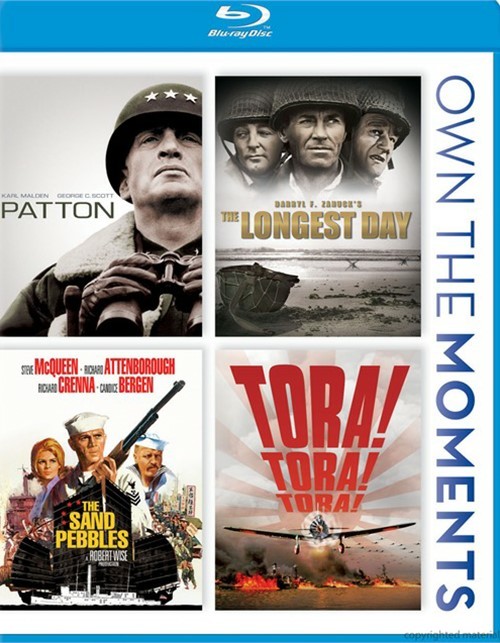 Winner of seven 1970 Academy Awards including Best Picture and Best Actor for George C. Scott, Patton is a riveting portrayal of one of the twentieth century's greatest military geniuses. As rebellious as he was brilliant, George Patton (Scott) was the only general truly feared by the Nazis, yet his own volatile personality was the one enemy he could never defeat.

The Longest Day is a vivid re-creation of the June 6, 1944 Allied invasion of France, which marked the beginning of the end of Nazi domination in Europe. Featuring a stellar international cast, and told from the perspectives of both sides, this fascinating look at one of history's biggest battles ranks as one of Hollywood's truly great war films.

Nominated for eight 1966 Academy Awards including Best Actor for Steve McQueen and Best Picture, The Sand Pebbles blends explosive action with stirring drama as it tells the tale of war-torn China in 1926, and an American sailor (McQueen) caught in the middle, who has given up trying to make peace with anything - including himself.

This classic Pearl Harbor epic, one of the most spectacular action films ever made, meticulously recreates the stunning attack on American f-rces by the Japanese. Nominated for 5 Academy Awards, Tora! Tora! Tora! (the Japanese signal to attack) features a joint U.S. and Japanese production team, chronicling both sides of the unforgettable Pearl Harbor story with awe-inspiring accuracy and explosive action.

Review "Patton / The Longest Day / The"

Reviews for "Patton / The Longest Day / The"