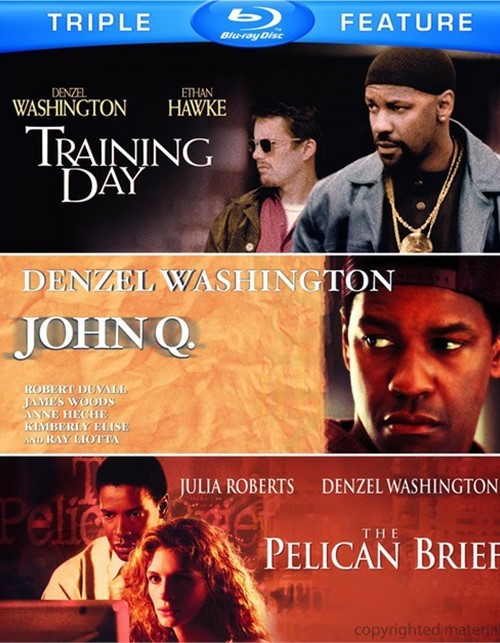 Police have surrounded the ER where a desperate man holds hostage and demands that the hospital do what his HMO refuses to allow - provide an operation for his critically ill son. The media storms the scene and with each passing moment, the man called John Q is becoming a hero of sorts. Academy Award winner Denzel Washington brings remarkable depth to the title role of this issues driven thriller featuring an elite cast. Is John Q a vigilante? A heroic father? You decide. But when it comes to his son, John Q won't take no for an answer.

Two Supreme Court justices have been murdered and a lone law student (Roberts) turns her suspicions about the deaths into a speculative brief that sends shock waves into the highest levels of government. She and a determined investigative reporter (Washington) want to tell the world what they have uncovered if they live to tell it. The race is on and these two are more than runners. They're moving targets.

Rookie cop Jake Hoyt wants to stop crooks, not become one. But staying on the right side of the line that separates cop from criminal will be more challenging than anything he's faced. Because Hoyt's senior partner for the next 24 hours is Alonzo Harris, an undercover narc meaner than any of L.A.'s mean streets.

In a powerful departure from his frequent good-guy roles, Denzel Washington plays Harris, the twisted but charismatic detective who both attracts and repels as he becomes the kind of thug he's supposed to collar. Ethan Hawke plays unseasoned recruit Hoyt. And Antoine Fuqua (The Replacement Killers, Bait) directs, guiding a cast that includes music stars Dr. Dre, Macy Gray and Snoop Dogg. Training Day. It's a day of reckoning.