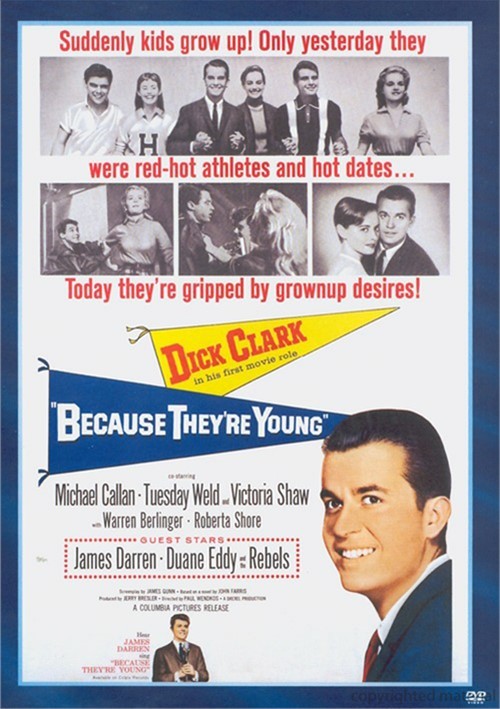 Director Paul Wendkos (Gidget, The Burglar) addresses youth culture and the clash between one generation and another in a story of a sympathetic young teacher (Dick Clark, TV's American Bandstand) and his high school students. Neil Hendry's (Clark) class includes Buddy McCalla (Warren Berlinger), a popular member of the football team; Ricky Summers (Roberta Shore), a pretty young cheerleader; Anne Gregor (Tuesday Weld, Once Upon a Time in America and A Safe Place), a girl mature for her years as the result of a scarring "experience"; and Griff Rimer (Michael Callan, The Interns and Cat Ballou), a tough-as-nails transfer from Conway. Neil becomes romantically involved with the principal's secretary (Victoria Shaw, The Eddy Duchin Story), but his involvement with his students is a cause of concern for the principal. Any respectable teen-flick from the '60s should have musical guest appearances: here they're by James Darren and Duane Eddy and the Rebels.

Review "Because They're Young"

Reviews for "Because They're Young"