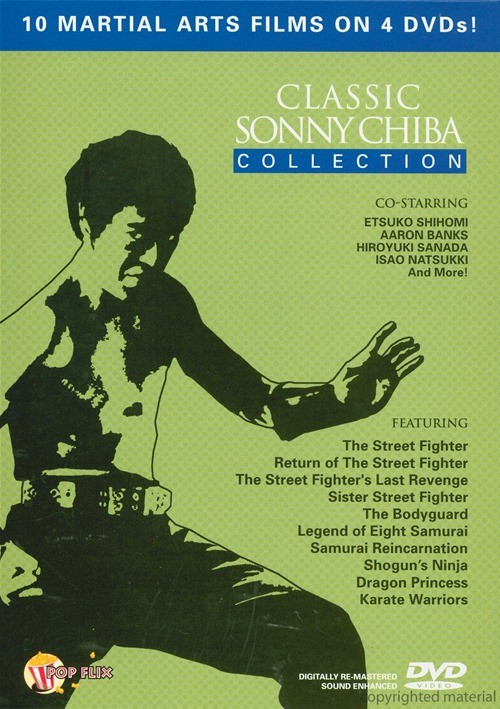 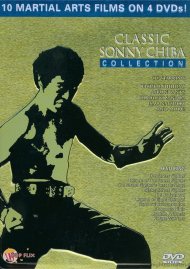 Magnificent international action star Sonny Chiba performs at the very top of his game in these ultra-stylized martial arts classics!

Tough-as-nails mercenary Takuma Tsurugi (Chiba) refuses to kidnap a beautiful heiress, instead goes to war with the mobsters who are after her. Widely considered one of the best martial arts movies ever made!

Return Of The Street Fighter:

The merciless killing machine (Chiba) is back! This time, he is hired by the mob to execute a respected karate master by ripping out his vocal cords. When he refuses, Tsurugi is put on the death list himself.

No one can stop Tsurugi's fists of fury after mobsters double-cross him and murder his girlfriend!

A fierce female martial arts warrior (Shihomi) enlists the aid of a master karate expert (Chiba) to rescue her kidnapped brother from a bloodthirsty drug lord. High-kicking martial arts beauty Etsuko Shihomi is one of the most lethal screen vixens in grindhouse history!

Legend Of The Eight Samurai:

A young samurai warrior (Chiba) battles a clan of undead sorcerers, an evil witch, and a killer centipede to protect a beautiful princess.

A martyred samurai warrior sells his soul to Satan and is resurrected with the power to raise the dead. Can a samurai master (Chiba) armed with an evil sword defeat the demons?

An evil Shogun (Chiba) seeks to destroy the Momochi clan in order to obtain two daggers that hold the secret to their cache of hidden gold!

A master karate expert (Chiba) trains his daughter (Shihomi) to be a karate-killing machine after he is nearly beaten to death and blinded in one eye by a gang of thugs!

A mercenary killer (Chiba) wanders into town and pits two rival gangs against each other in an all-out battle over a big stash of heroin. Street Fighter may be Chiba's most famous film but Karate Warriors is his best!

Special Bonus Film - Viva Chiba! The Bodyguard:
After a failed attempt on his life, international crime fighter Sonny Chiba vows to wipe out Japan's remaining drug traffickers! With exaggerated violence and stylized direction, this is classic Chiba at his finest!