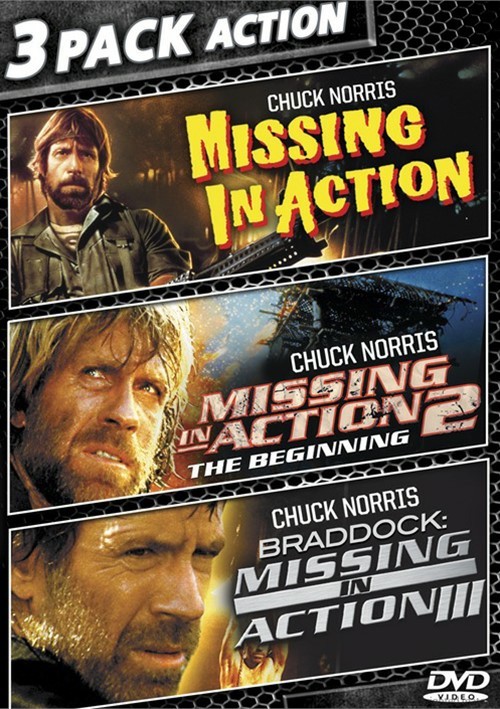 Following a daring escape from a Vietnamese POW camp, Special F-rces Colonel, James Braddock, (Chuck Norris) is on a mission to locate and save remaining MIA's. Aided by a beautiful State Department official (Lenore Kasdorf) and former Army buddy (M. Emmet Walsh), Braddock amasses top secret information and state-of-the-art weaponry. Now this one-man army is prepared to blast his way into Vietnam...but will he be able to blast his way back out?

Missing In Action 2: The Beginning

A prequel to Missing in Action, Colonel Braddock (Chuck Norris) is captured during the Vietnam War. The camp is run by the crazed Colonel Yin (Soon-Teck Oh), who f-rces the POW's to grow opium for French drug runners and tries to get them to admit to and sign a long list of war crimes. Braddock must escape and free the fellow prisoners in order to survive.

Believing that his Asian wife had been dead since the Vietnam War, Vietnam veteran Colonel Braddock (Chuck Norris) discovers from a missionary that not only is she still alive, but she has a 12-year-old son. Braddock ensues on a one-man mission to find them. Armed with high-tech weapons, he fights his way through Vietnam.

Review "Missing In Action / Missing In"

Reviews for "Missing In Action / Missing In"